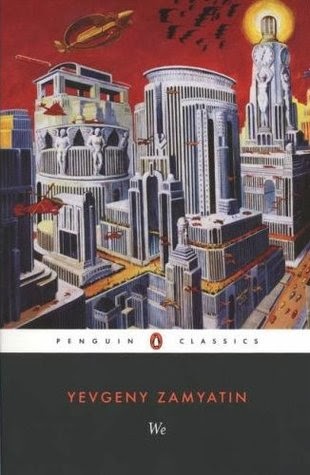 This is my double whammy title: a Vintage SF Russian Classic!  We is one of the very first dystopian novels written (leave it to a Soviet to invent dystopian literature!), and it inspired both Brave New World AND 1984.

Zamyatin started off as a Bolshevik, but after the Revolution, he was unhappy with the way things were going in the new Soviet regime. He seems to have disliked authorities of any kind.  Disillusioned by the oppression he saw, he became a dissident and wrote critiques and political satire.  He was an eminent voice in the 1920s, in the middle of all that literary maelstrom that was going on.  We, written in 1920-21, bears the distinction of being the first work banned by Soviet censorship.  It was not published in Russia for decades, but Zamyatin smuggled it out to the West, where it was published in 1924, though not in an English translation.  Zamyatin hung on in the USSR for some time longer, but was eventually exiled; he died in Paris in 1937.

We consists of the writings of D-503, a mathematician in charge of building a spaceship that will take the One State's message to other planets and societies.  Everyone who can is asked to write material in praise of the State to go on the ship, and of course D plans to comply, but his writings describing the beauties of life under the Benefactor turn into a diary describing his meetings with I-330, a woman who both fascinates and repels him.  Under her influence, he first falls apart and then starts to think about disobeying the State.

The One State is fascinating all by itself.  Glass is their main building material; everyone lives in glass apartment buildings, visible at all times with no secrets.  People are called numbers, and absolutely everything is rationalized, numbered, and measured.  Even recreation consists of walking in step with thousands of others while patriotic music plays.  The ruler, called the Benefactor, is weirdly prophetic of Stalin in several ways.

As a piece of history, this is an amazing book.  I'm not so sure how I feel about the writing.  D has an irritating tendency to use ellipses and leave sentences unfinished.  It can even get a little tricky to figure out what he is saying.  Geometric shapes are very frequently used as symbols of people (I'm not quite sure how to describe what I mean) which is very appropriate to D but also difficult to understand in spots.  In other places, Zamyatin has some great prose that I enjoyed a lot.

I read up a bit about how much Huxley and Orwell owed to Zamyatin, and that was very interesting.  I also found Orwell's review of We, written upon his first reading of it (in French, since it was not yet available in English), so you might like to look at that.

The edition I read was translated by Mirra Ginsburg in 1972.  Newer translations seem to have superseded this one.  Ginsburg was more familiar to me as an author of picture books for children, but she translated Bulgakov and other Russian texts.