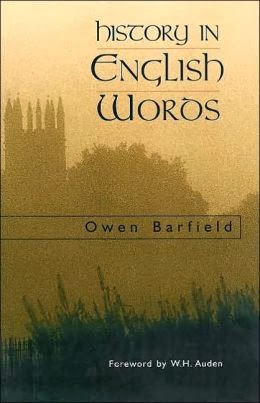 I was so excited about this book when I first got it!  Then I made the mistake of trying to dip into it as a bedside book instead of really focusing and reading it all at once, and I got bogged down.  This time around, I treated Barfield right and read it in large chunks, and it's a fantastic book.

Owen Barfield was an Oxfordian scholar, a philosopher (in the old sense) and essayist, and an Inkling.  He and C. S. Lewis met in 1919 and were solid friends for many years, during which they appeared to agree on very little.  Barfield was very interested in 'the evolution of consciousness' and spent a lot of time on developments in language and culture.  Later on he became an Anthroposophist, which I am still not quite sure how to pronounce, but you see its remnants now in the Waldorf philosophy of education.

History in English Words was an early book, published in 1926, and is nothing less than a history of Western thought as expressed in the English language.  The first section of the book is general and starts with pre-history and the development of the Indo-European language family, but since the book is from 1926, Barfield uses the older term of Aryan.  (So if you read it, remember that every time he says Aryan, he means what we would mean by Indo-European.)  From there he focuses in on England: the successive invasions of new groups, the new waves of religion and ideas, and then modernity.  The second section handles more specific stages in the development of Western thought as expressed in English words, starting with a chapter on myth and going through to mechanization and so on.

Where Barfield is really at his best is in explaining how new ideas needed new words, and relating this history of thought in a clear, concise manner that is just wonderful.  I did find that it needed concentration; like so many older non-fiction books, Barfield is dense and writes a 200-page book where a contemporary writer would produce 500 or more pages.

A great book of philology.  Language geeks should not miss it.