By Jean - January 25, 2014
Rose City Reader's 2013 Challenge actually extended to the end of this month, so as to give space for wrapping up anything that needed finishing--a great idea, I thought.  Now it's time for the final post and count.  Here are the different countries I visited.  Many of them got several books, really.  I ended up reading maybe 4 books set in Poland, for example, and I don't even know how many UK titles.  And for this purpose, I can only count one UK book, not separate titles for Scotland, England, Wales, and NI.  So here it is: 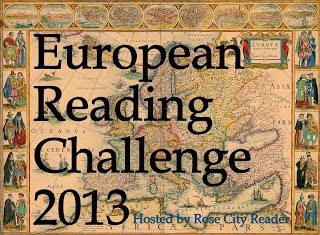 16 different countries in all.  This is well over the goal of 5 books at the highest level, but there is no way I will win the Jet Setter Prize for the most countries visited.  I would probably have to work pretty hard at that.
Euro Challenge

Anonymous said…
Speaking of Maphead, here I am! :)
Nicely done, Jean! Besides the sheer number of books you read for the challenge, the quality of books that you read sets you apart from probably the bulk of the challenge participants. At least several of the books on your list are quite lengthy.
Well done!
Inspired by yours, did my Wrap Up post this afternoon.
January 26, 2014 at 5:28 PM

Jen K said…
We tied! I'm impressed with maphead's 21. I really enjoyed Sister Queens when I read it, and I remember Struwwelpeter giving me nightmares as a kid in Germany. Also, the story about the kid that wouldn't eat his soup. So disturbing.
January 28, 2014 at 1:21 PM

Gilion at Rose City Reader said…
Congratulations! You made it to the Honorable Mention list for reading more than 10 books set in different countries.

The main wrap up post listing you as one of the Honorable Mention participants is here: http://www.rosecityreader.com/2014/02/2013-european-reading-challenge-wrap-up.html
February 5, 2014 at 6:02 PM