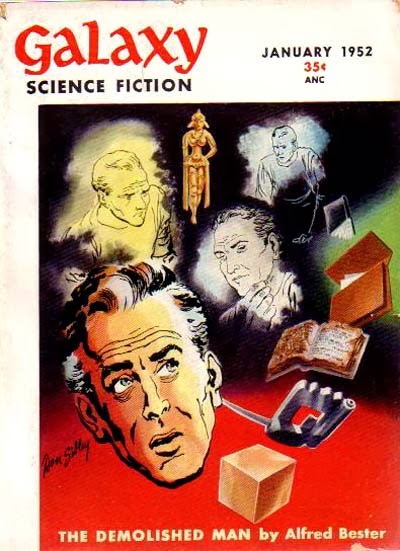 The Demolished Man, by Alfred Bester

Alfred Bester is one of the great grand-daddies of science fiction, so I wanted to read one or two of his classics.  The Demolished Man is a great yarn, set in a future where some people have developed telepathic powers.  These "espers" (as in ESP) are organized and controlled by a Guild that oversees their employment and also by the way wants to make the whole human race telepathic.

Ben Reich is the powerful head of the Monarch corporation, obsessed with overtaking the rival D'Courtney company.  He decides that he must kill D'Courtney--but no one gets away with murder these days, not in a world where telepaths can sense violent intentions and report them before they become actions.  Reich starts planning, and blackmailing his subordinates into helping him.  He is sure that between him and his new partner, a high-level esper, they can plan the perfect crime.  If the plan fails, they will both be put through the process known as Demolition.

This novel was originally published in 3 parts in Galaxy, so I've included an original cover image for you.  It won the first Hugo Award (named for the founder of Amazing Stories magazine) in 1953, and of course it's been very influential.  The idea of the Esper Guild, an organization to control telepaths, is great and has all sorts of avenues to explore.  Babylon 5 lifted the idea entirely, called it the Psi Corps, and named its menacing leader Alfred Bester in homage.

Great stuff, and necessary reading for the serious SF fan (or even the fundamentally unserious, like me).