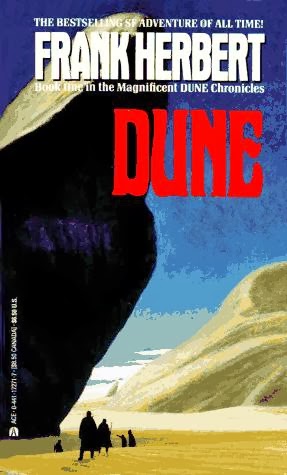 I hadn't gotten around to reading Dune before.  I've seen two film versions, though (the one with Sting and the SciFi Channel's miniseries).  I guess it was high time I read the real thing.

In the very far future, there is a galactic empire--but an empire without computers or artificial intelligence.  Instead, certain people are trained to calculate.  Mentats are coldly logical and concentrate on math; the Bene Gesserit learn to manipulate emotion and influence politics, using religion as their tool.  The desert planet of Arrakis produces one of the most valuable substances in the galaxy, and it is therefore exploited and oppressed--but the desert people of Arrakis are waiting for their savior.  He is Paul Atreides, and he's going to change everything.

The setting is clearly based on the politics of the Middle East.  Spice is oil, the Fremen are probably Bedouin, and much of the vocabulary is based on Arabic.  The Arabic borrowings were probably less obvious 40+ years ago, when hajj wasn't a word that everyone knew.

It's a good story, very complicated and well-done.  There's some great stuff, and the Fremen culture is neat to read about. I'm not sure it's really "the bestselling SF adventure of all time!" like the cover says, but it's one of the big SF classics.  I've heard that the sequels are all less good, though, so I think I'll stop while I'm ahead.

This was going to be my final post for Vintage SF Month...but then I found something pretty great!  Stay tuned to see if I can get in under the wire.
SF/fantasy