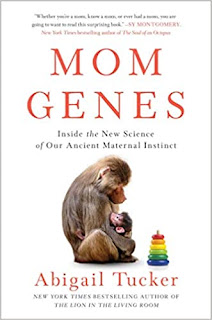 Mom Genes: Inside the New Science of Our Ancient Maternal Instinct, by Abigail Tucker

This is a fantastic book, and if you're a mom you'll want to read it.  If you're not a mom, it's probably a good idea to read it anyway, because after all, there are a lot of moms around.

Scientists have only recently really started to seriously study the biological changes that come with motherhood.   We've long assumed that adults, on the whole, don't change much.  And it turns out that moms change -- a lot.  Our cells, our genes, our brains...all go through massive reconstruction.

Tucker goes through a whole lot of research (she's a journalist, not a science person herself) and combines it with stories from her own life.  She's a mom of four herself and has plenty of relevant experience.  This is definitely a popular science book for laypeople, and it's got a good deal of humor as well.

Compared to their rapidly developing infants, moms have a reputation for being dull and predictable, hardly hotbeds of sexy hypotheses.  In nature, animals such as baby whales sometimes mistake ocean buoys and other large, inert orbs for their mothers; scientists may make similar assumptions.

Us warm-blooded types who have live births are known as mammals because of our specialized parenting.  Tucker describes a zillion experiments and observations, on rats, mice, apes, and all sorts of mammalian critters -- and all of them go through big changes upon becoming mothers.  These changes are complex and, happily, do not rely upon one mechanism; they're all over the place, genetically, hormonally, and in every other way.

You can induce mothering in non-mother female rats simply by putting them in a cage with babies for a week or so (and making sure they don't eat the babies while you wait).  Some species need this exposure in order to become competent mothers later on, and in humans, babysitting is helpful training, although not necessary.  A few fun facts:

There is plenty more, and quite a bit about dads too.  They're not left out. It's a fascinating book!  Read it!

Your basic takeaway here is -- don't mess with moms.  They're hard-wired for the job.