Summerbook #9: The Heart of the Hunter 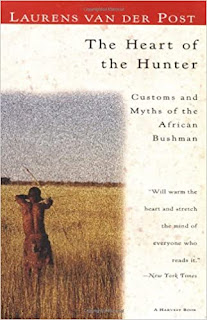 The Heart of the Hunter: Customs and Myths of the African Bushman, by Laurens van der Post

Here's a book I picked up from the donation table because it looked interesting, and because I wanted a Botswana book for my Reading All Around the World project.  Laurens van der Post seems to have had the most amazingly varied and interesting life, to the point that I'm going to have to make a list.

He wasn't all roses by any means; his married life was checkered at best, and he impregnated a 14-year-old girl and never really acknowledged it.  So.

The book I read is entirely about traveling in the Kalahari and the beliefs of the San.  In the first part, van der Post is part of a desert expedition, and they meet some different family groups of San people.  He talks a lot about the scenery and animal life, very poetically, and about how San people are treated by everybody else.  In the second part, he narrates some core San myths, about the creation of the world and the first peoples (this includes animals).  He also puts in a lot of explanation about why this or that animal might represent a particular aspect of creation.  This is helpful, because I don't know what a dassie is or how it behaves, but it also feels, to a contemporary reader, like he's probably putting a good bit of his own interpretations in without realizing it.  Certainly when I found out that he was good buddies with Jung, it explained quite a bit.

That said, the stories are lovely and fascinating, and I wasn't familiar with them at all, so it was a nice read on the whole.  Van der Post felt very strongly that the San were the original natives of Africa, and as much like the first humans as anybody would ever find.  He waxes pretty romantic about it, which will make the modern reader raise a skeptical eyebrow, but hey -- if that's what it took in the 1950s and 60s to keep the San people from being completely squashed, I'm not going to complain.