Summerbook #8: The Lady of Godey's 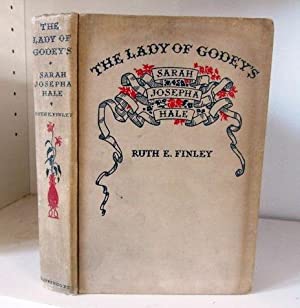 I had never really heard of Sarah Josepha Hale, but was recommended this 1931 biography some time ago -- and what a great decision that was!  Anybody interested in women's history (or even American history) would do well to read this, because Hale should be far better known as a hero of American feminism.

Born in 1788 in a tiny New Hampshire village, Hale was extremely fortunate in having a literate mother who believed in education for girls as well as boys.  At this time, fewer than half of American women could read and write.  When she married at 21, her husband encouraged her literary pursuits, and they loved to read aloud together in the evenings.  Mr. Hale died young, leaving a widow with five children to support, and so Mrs. Hale decided to make a living at what she did best.  She produced a novel and a good deal of poetry, and then she got a job offer: to edit and produce the first women's magazine in the US.

The success of the Ladies' Magazine inspired imitators, and soon Mr. Godey came along with his version, and after a few years he offered the editor's position to Mrs. Hale.  She stayed in that job until 1877 -- nearly 50 years of magazine editing and writing!  These days we associate Godey's Lady's Book with the fashion plates, but it contained much more than that.

Hale's goal, at all times, was the betterment of women's condition.  Education was first and most important in her thoughts, but everything else was included too; if Mrs. Hale could think or hear of something that would help people, she would advocate for it, and was often the first to do so.  The list includes: 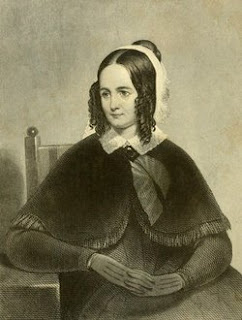 But her style was not to demand or to confront; it was to propose and to advocate, and most often to write as though everybody already agreed with her (and she wasn't above a bit of flattery in a good cause).  This friendly, non-confrontational style -- completely wrapped in Victorianism -- was so popular and enduring that she effected massive changes without anybody really noticing very much.

Hale was also the person who really pushed through Thanksgiving as a national holiday (though she had nothing to say about Pilgrims or Native Americans -- I guess that was a later accretion?).  She was simply advocating for a yearly nationwide day for families to give thanks, as had sometimes been announced by George Washington.

And, she wrote "Mary Had a Little Lamb," along with plenty of other children's rhymes and songs.  She was also good friends with Edgar Allan Poe.

Ruth Finley admires Mrs. Hale very much, but this is by no means a hagiography.  Finley, a modern woman of the 1930s, is often exasperated by Victorianism -- though in the most affectionate way.  She includes an entire chapter that is both a defense and a critique of the 19th century, and is a lot of fun to read. There are also some fascinating tidbits about everyday life in the 1830s, and I finally found out what "vinegar and brown paper" means.  (People literally used brown paper soaked in vinegar for medicinal purposes, and as a wrinkle prevention.)

Here are some favorite excerpts:

Her real contribution lies in the fact that, having the soul of a modern, she understood -- and deliberately employed -- Victorianism...

...she was too far-seeing to put herself outside the pale of conformity.  Having visioned her goal, she set herself down in genteel effacement, feathered quill in hand, and for the full measure of fifty years proceeded to cajole her public into one reform after another.h

[On terrible 19th century writing]  However, right in the midst of all the jargon, bombast, and piffle printed for this new reading public, Poe, Irving, Cooper, Emerson and Whitman were striving to lay the foundations of an American literature and of American taste.  Of course, they were in the lean minority.  Turning through the files of Godey's Lady's Book, one wonders how any mind that could read the words could bring itself to peruse the meaningless trash scribbled by the majority.  Retoric can be relied on to cover a multitude of lacks; in this art the Victorians excelled.  They 'indulged in elegant language,' to quote their own measure of literary worth, and it was an indulgence that bordered on inebriety -- a weepy inebriety at that.

...she was herself a Victorian, in that no convention harmless to reform was broken by her.  And, if in the observance of convention she too was absurd -- which she was -- it was an absurdity that won and kept the confidence of her more absurd public.

While some of the best American poetry was written between 1830 and 1880, it is also true that during that span of fifty years more metered trash was published in this country than ever before had been recorded in all the history of the ages.  Every crossroad boasted a local 'poet' or half a dozen 'poetesses.'  The latter in particular inundated press and public with their burblings.

I would very much like to see a Condor Quill size pen!