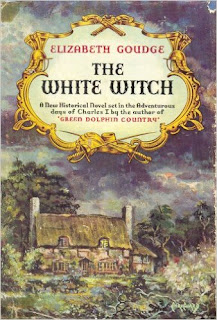 The White Witch, by Elizabeth Goudge

I've been saving this for a treat.  I read it several years ago, when I was just getting started with Goudge, but I didn't remember anything about it, and I bought my own copy so I just put it on the TBR shelf.  I'm trying to collect Goudge books, but the ones I don't have are the ones that are hard to get and expensive.

Elizabeth Goudge must have had a thing about the 17th century.  Quite a few of her historical novels are about Charles I or II -- a set of kings that I personally haven't got much interest in.  But anyway, this story is set at the start of the English Civil War.  Charles I is just starting to fight it out with the Parliamentarians, and Oliver Cromwell isn't even running his side yet.

We have several interconnected people: the Haslewood family -- Robert has joined the Puritan side -- his sort of cousins, a group of Romany that habitually camp nearby, and Froniga, the half-Romany white witch of the title -- Francis Lord Leyland, in the king's confidence and working as a spy -- Yoben, who isn't Romany but lives with them -- the local priest, Parson Hawthyn, and Mother Skipton, a black witch.

The story unfolds slowly and beautifully, and each person has their own path to follow.  Goudge treats the beliefs of the time with sensitivity, and sinks into the past in way that I really like.  Nobody is a 20th-century person dressed in historical clothing, teaching everybody to be modern.  Froniga is good with herbs, and she believes in the spells and incantations she uses.  At one point she takes a sick child to King Charles in hopes of him curing the King's Evil with his touch.

The other thing I like about Goudge is hard to describe (for me, anyway).  Nobody ever gets a comeuppance or punishment in a Goudge novel; all are given a shot at redemption and better choices.  There are very few authors who can infuse their writing with their faith and not have it come off as preachy or overly sweet, but Goudge is one of them.  She knows very well how difficult life can be, and her characters struggle -- and don't necessarily overcome -- but find comfort, healing, and better things.

If you've never tried Elizabeth Goudge, I do recommend trying her out, but she's a fairly specialized taste, I think.  My own favorite of the adult novels -- I think -- is The Rosemary Tree.  Of the children's stories, The Little White Horse is best known, and lovely, though I prefer Linnets and Valerians.