Summerbook #6: The Third Reich in Power 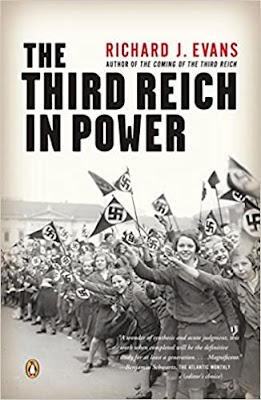 For my summer reading, I wanted to choose one heavy-duty WWII book per month.  This history, which I got sort of accidentally by asking the public library to purchase it and instead they sent me a Zip copy (which is like ILL without a due date), has 28 chapters, and so I set a goal of at least one chapter per day.  Since it's a good 700 pages, that was still on the ambitious side!

Evans continues his saga that I started with The Coming of the Third Reich.  Hitler is now in power and in a matter of months, he and his buddies seized a lot of power that they didn't have a right to -- but nobody stopped them, either.  The Nazis made it very clear that they had no respect for the law or for human rights; might made right.  Over the next six years, they:

What struck me as particularly interesting about Evans' narrative is that he is of the opinion that a whole lot of Germans -- especially those old enough to remember a different kind of government -- just weren't with the program.  They were bored and mostly unconvinced by the propaganda.  They kept going to Jewish shops, and while annexing Austria was exciting and popular, that wasn't so true with Czechoslovakia, and by the time Hitler got to Poland  -- well, most Germans weren't super-excited about the prospect of another war.  If you've read Hitler's Willing Executioners, Evans has a very different perspective, and thinks that while Germans were vulnerable to propaganda over time, and wanted Germany to be pre-eminent in Europe, a lot of them were also shoved along the road to war rather reluctantly.

There's no way to cover everything in this book, and I can't even share all the places I tagged -- there are just too many.  (There's fascinating stuff about the universities/academia/medical field that's all too long to quote.)  So here's a selection:

Hitler's opinion, Huber* declared...represented the 'objective' will of the people, and in this way he could counter 'misguided public opinion' and override the selfish will of the individual.  Hitler's word, as another commentator...noted, was thus law, and could override all existing laws.  He was not given his powers by the state, but by history.

The purpose of the law, in the eyes of the Nazis, was not to apply long-held principles of fairness and justice, but to root out the enemies of the state and to express the true racial feeling of the people.

This was, [Goebbels] went on, a 'revolution from below,' driven on by the people, because, he said, it had brought about 'the transformation of the German nation into one people.'  Becoming one people meant establishing a unity of spirit across the nation, for...'the era of individualism finally died...the individual will be replaced by the community of the people.'

By the mid-1930s...modernist apartment blocks were no longer in fashion.  Instead, the Nazi idea of domestic architecture favoured a vernacular, pseudo-peasant style...these were only showcases for the suburbs; necessity meant that blocks of flats still had to be constructed in the inner cities, where pitched roofs, however, were now preferred over flat roofs because they were believed to be more German.

In July 1935...a speaker told a meeting of the Nazi Students' League in Bernau: 'One is either a Nazi or a committed Christian.'  Christianity, he said, 'promotes the dissolution of racial ties and of the national racial community...for us the Nazi idea alone is decisive.  For us there is only one example, Adolf Hitler and no one else.'

Christianity, Himmler [declared], was 'the greatest of plagues'; true morality consisted not in exalting the spirit of the individual but in abnegating oneself in the service of the race.  Moral values could be derived only from consciousness of one's place in, and duty to, the chain of 'valuable' heredity.

Nazism as an ideology was no religion, not just because Hitler said it was not, nor because it had nothing to say about the hereafter or eternity or the immortal soul...but also...because it was too incoherent to be one.

...despite this massive programme of military training and ideological indoctrination, the effect of the Hitler Youth on the younger generation was mixed.  The more it evolved from a self-mobilizing movement fighting for a cause into a compulsory institution serving the interests of the state, the less attractive it became to the younger generation.

...Hitler had lost all confidence in Schacht, whose economic realism was now a serious irritation for him.

[On rapid rearmament and the impossibility of meeting goals] In 1937 the air force only received a third of the steel it required to meet its production targets.  In October 1938, however, Göring announced a five-fold increase in the size of the air force to a size so enormous that it would have required the import of 85 percent of known world production of aircraft fuel to keep it going. [Luckily that didn't work.]

The truth is, the economic system of the Third Reich defied easy categorization.  To some extent its sheer irrationality undermines any attempt to portray it as a system at all.

From 1937 Hitler also claimed royalties on the use of his portrait on postage stamps, something Hindenburg had never done...  (!!!)

[Hitler made millions on royalties and fees, while publicly renouncing his smallish salary to show off his selfless dedication to the cause.] Nevertheless, when the Munich tax office reminded him in 1934 that he had never paid any income tax and now owed them more than 400,000 Reichsmarks in arrears, pressure was brought to bear on the tactless officials and before long they had agreed to write off the whole sum and destroy all the files on Hitler's tax affairs into the bargain.

On the one hand, autarky was designed to prepare Germany for a lengthy war; on the other hand, rearmament was pursued with a headlong abandon that paid scant regard to the dictates of national self-sufficiency....The answer was plunder.  The corruption, extortion, expropriation and downright robbery that became the hallmarks of the regime...put plunder at the heart of the Nazi attitude towards the property and livelihood of peoples they regarded as non-Aryan.

Applying the principles of racial hygiene to society meant sweeping away traditional Christian morality and replacing it with a system of ethics that derived good and bad solely from the imagined collective interests of the German race....when the Catholic Church objected to measures such as forcible sterilization, Nazi ideologues like the doctors' leader Gerhard Wagner portrayed this as another episode in the long struggle between religious obscurantism and scientific enlightenment, a struggle which science was bound to win.  [These guys also argued about whether to expect the average approved woman, who should definitely not get a higher education, to produce a minimum of eight or fifteen children.]

Mothers who...gave birth to ten children were given the additional honour of having Hitler as godfather of the tenth child, which in the case of boys meant naming the infant Adolf, something which Catholic families who resented Hitler's persecution of their Church must have found somewhat distressing.

[In 1938, meeting with the Austrian head of state]...Hitler launched into a furious tirade....For two hours he lectured Schuschnigg on his own invincibility ('I have achieved everything that I set out to do and have thus perhaps become the greatest German of all history')...

Well, probably nobody has gotten this far because I still got kind of carried away.  This is a huge book, covering myriad aspects of Germany in the 1930s, and it's excellent.  Well worth the long effort.