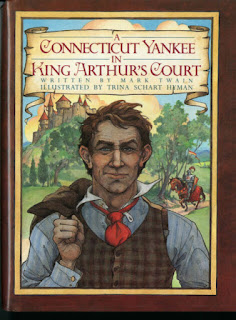 A Connecticut Yankee in King Arthur's Court, by Mark Twain

Oh gosh, it is so long since I read this tall tale that I had forgotten everything except that Trina Schart Hyman did wonderful illustrations, and there's a lot about slavery.  So earlier this year I put it on my pile of books to read soon, and it was so much fun.

This story is a bit of a mish-mash, really.  It started as a send-up of romantic medievalist tales after Twain had a dream in which he was a knight-errant himself -- but how do you scratch an itch in armor, much less do your private business?  Where do you keep your hanky?  Don't you clank a lot in church?

So Twain took a downright, hard-headed, democratic-minded mechanical man, Hank Morgan, and imagined how he would modernize Camelot according to his desires.  Surely a man who knows how to manufacture gunpowder and telegraph wire would be able to get up to a lot of mischief!  But then, a modern man also has a lot of political opinions; he would find all this aristocratic pomp and show to be both ridiculous and backwards.  And most of all, Hank Morgan would see and be appalled at the unquestioned existence of slavery.

So Twain's Hank Morgan starts off establishing his credentials as a magician (that being the only title they would understand or respect) and getting some projects going.  He befriends King Arthur and the other knights, though they do not respect him as one of themselves -- Hank figures he'll eventually be able to abolish aristocracy (not to mention slavery), but he'll have to be patient.  Then he has to go out on a quest himself, to help the maiden Alisande.  And one day he mentions to King Arthur the possibility of going out into the world disguised as a peasant...

It's impossible to turn Arthur into a passable peasant, and a long comedy of errors ensues, with the duo ending up sold into slavery themselves.  And eventually Hank really does try to end aristocracy and create a republic of equal citizens.

Twain is tragic and comic by turns, blending his rage at injustice and oppression with hilarious parody of chivalry -- and of Hank's own Yankeeness, too.  He has as many blind spots as any knight, after all.  It's one of my favorite Twain books and if you've never read it, you should!

I just love Trina Schart Hyman's illustrations in this edition -- well, I love TSH in general.  They are beautiful and witty, comical and also heart-rending.  Here's Merlin for you -- one of the few images that doesn't combine chivalry with incongruous modernities, but these are oddly difficult to come by on the net.   This edition is out of print, as far as I can see, but Norton has one with the first illustrations, which look pretty great too.