The Wandering Fire and The Darkest Road

The Wandering Fire and The Darkest Road (#2 and 3 in The Fionavar Tapestry), by Guy Gavriel Kay 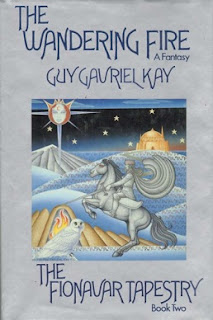 I went ahead and finished the Fionavar Tapestry stories.  The trouble, of course, is that if I tell you anything about the plots, it will spoil the whole trilogy, but I'll do my best.

We have five people from our own world who have been taken to Fionavar, the original of all the worlds, where they were dragged into the burgeoning war between Maugrim (the dark lord) and pretty much everyone else.  At the end of the first book, they went home, but now, months later, they're back again.

I said before that it's pretty Tolkien-esque and that continues.  Many of the story beats are really similar to Lord of the Rings, though there are no hobbits.  Kay adds King Arthur into the mix, which is interesting -- especially as he bears a curse -- and there are other Celtic elements.  And a good deal more sex, of course. 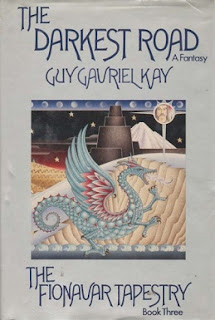 Special side note:  There is also a half-god, lieutenant of Maugrim, who started off as a regular forest dweller, but turned to the Dark after the girl he liked fell in love with somebody who wasn't him.  He's spent the last thousand years working towards his goal of killing everything in the world -- hopefully including the Dark Lord -- which seems like a little bit of an overreaction.  I was reminded of a post Jenny wrote long ago, in which she said something like "I understood already, and it isn't enough."  Possibly if you're the sort of person who is going to try to kill the whole world if the girl you like doesn't like you back, she should definitely not go out with you.

All the various characters go their separate ways, accomplishing their deeds, through the second book, and in the third, they start to converge again towards the final battle.  Not everyone makes it that far; Kay is quite willing to have some of his characters die.

Will anybody survive the final battle?  Will the Dark Lord be defeated?  If you've got to know, you'll have to find the books yourself.  I did quite enjoy them; I just also couldn't stop matching events and characters with LOTR.