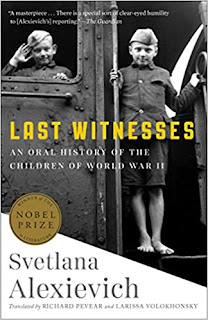 Last Witnesses: An Oral History of the Children of World War II, by Svetlana Alexievich

You know, having WWII as a historical focus this year is informative and fascinating, but not necessarily very much fun.  I have read quite a few grim but important books about the war in Europe, and this one is definitely in the top five; and wow -- this really brings home how utterly devastating the war was to the USSR, which is something that Westerners have historically known little about.  Until the fall of the Iron Curtain, much of this was just not available to us, and naturally we focused on Western Europe and the Pacific.  I remember years ago, my Russian sister-in-law expressing frustration with Western ignorance about how much the USSR had done and sacrificed in WWII, and I had no idea what she was talking about.  She was completely right; but also we just didn't have much of the necessary information.

I've now read quite a bit of Svetlana Alexievich's work: Voices From Chernobyl, Second-Hand Time, The Unwomanly Face of War.  I think Zinky Boys is the only one left (available in English, anyway).  So you may be familiar with her technique, in which she directly transcribes oral interviews to the page, offering little, if any, commentary.  In this book, which was first published in 1985 in Russian but not in English until last year, she collects the memories of people who were children in the war.  Most of these memories are from Belorussians, especially from Minsk (which reflects what she could access), but there are quite a few from other areas as well.  Each gives the person's name, age at the start of the war, and current profession; the rest is a transcription of their speech.

Minsk was pretty much the first thing the Germans attacked in Operation Barbarossa, so it was a surprise attack.  Everybody was enjoying summer vacation and several people talk about how they were at camp, away from their parents, when the bombing started.  Some were evacuated east, even as far as Tashkent; others were trapped in Minsk; many wound up wandering the countryside.  Their parents were killed, or became partisans, or were simply unable to find their children, and thus many of the stories involve joining the partisans too, or being taken in by farmers, or ending up in orphanages.  It's quite impressive to read that people were very generous, taking in random children when they were starving themselves, and trying to feed refugees with nettle soup.  So many memories express gratitude and love towards the people they ended up with.  A few were reunited with a parent afterwards, but many weren't.  Almost nobody had a father any more.

This is a really tough read.  It will break your heart, and there will be tears.  I think it's an important account of war from a child's perspective, and highly recommended, but take it slow.  I got about four stories in before I had to take a break.

Karen K. said…
I've been meaning to read The Unwomanly Face of War, and I didn't know about her other books. This looks like an important book, so I'll have to try to read it when the world is a slightly less depressing place.

A couple of years ago I read a collection of memories of German women during WWII called Frauen: German Women Recall the Third Reich by Alison Owings. It was another important book that I could only read a little at a time. I find WWII history fascinating but I really have to break it up with other reads.
May 13, 2021 at 12:57 PM

Jean said…
I sure hope the world gets less depressing! I keep thinking things have just got to get better, but I've thought that for several years now. :/ I too find WWII fascinating, but making it this year's nonfiction theme may have been a little much. I've been reading two books at once about anti-Semitism and now I need something else for a bit.