The Unwomanly Face of War 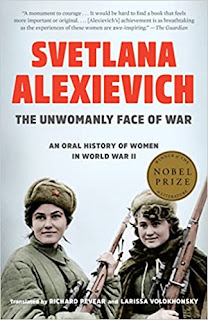 The Unwomanly Face of War: An Oral History of Women in World War II, by Svetlana Alexievich

This book was originally published in 1985, and was first translated into English a few years later, but I don't think it became very well-known at the time.  This is a new translation on the heels of Alexievich's winning the Nobel Prize and becoming well-known for her collections of oral histories.

Alexievich spent, as far as I can figure, at least a couple of years collection the material for this project.  She visited places all over the USSR, and interviewed thousands of women who had served in the war, but who had never been asked about their experiences or set down their memories.  After the war, the USSR preferred to focus on the great victory rather than the incredible hardships it took to get there, and people tended to assume that it was exclusively a men's victory.  So I am very grateful that Alexievich worked so hard to get all these women's stories!  They are amazing.  Amazingly harrowing, and heroic, and tragic.

Two things all these women seem to have had in common strike the reader.  First, their incredible youth, and also their zeal.  Over and over, they talk about running off to join the war at the ages of 15 and 16, of having their long braids cut off, of being too small to carry a heavy rifle or a wounded man (but doing it anyway), of growing during the war and coming home inches taller.  And they talk about their dedication to the cause, their absolute commitment to the Motherland.

Some quotations, first from Alexievich herself:


We didn't know a world without war; the world of war was the only one familiar to us, and the people of war were the only people we knew.  Even now I don't know any other world and any other people.  Did they ever exist?

When women speak, they have nothing or almost nothing of what we are used to reading and hearing about: How certain people heroically killed other people and won.  Or lost.  What equipment there was and which generals.  Women's stories are different and about different thing.  "Women's" war has its own colors, its own smells, its own lighting, and its own range of feelings.  Its own words.  There are no hereoes and incredible feats, there are simply people who are busy doing inhumanly human things.  And it is not only they (people!) who suffer, but the earth, the birds, the trees.

And from the veterans:


---The bring the wounded...They're crying...Crying not from pain, but from impotence.  It was their first day at the front; some of them hadn't fired a single shot.  They weren't given any rifles, because in the first year of the war weapons cost their weight in gold.  And the Germans had tanks, mortars, airplanes.  Their comrades fell, they picked up their rifles.  Grenades.  They went into combat bare-handed...Like into a fistfight...And ran straight into tanks...

---The Germans didn't take women soldiers prisoner...They shot them at once.  Or led them before their lined-up soldiers and showed them off: look, they're not women, they're monsters.  We always kept two bullets for ourselves, two -- in case one misfired.

---Finally, we were on their land...The first thing that struck us was the good roads.  The big farmhouses...Flowerpots, pretty curtains in the windows, even in the barns.  White tablecloths in the houses.  Expensive tableware.  Porcelain.  There I saw a washing machine for the first time...We couldn't understand why they had to fight if they lived so well.  our people huddled in dugouts, while they had white tablecloths.  Coffee in small cups...I had only seen them in the museum.  Those small cups...I forgot to tell you about one shocking thing, we were all shocked...We were attacking, and took the first German trenches...We jumped in, and there was still warm coffee in thermos bottles.  The smell of coffee...Biscuits.  White sheets.  Clean towels.  Toilet paper...We didn't have any of that.  What sheets?  We slept on straw, on sticks.  Other times we went for two or three days without warm food....It was hard for us to understand where their hatred came from.  Ours was understandable.  But theirs?

I'd say that this is a must-read for anyone interested in WWII or Soviet history.  How fortunate we are to have these records.
history memoir/biography non-fiction Russian literature TBR challenge