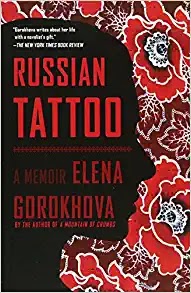 In 1980, Elena Gorokova, a scholar of the English language, married an American academic and moved from Leningrad (now back to being St. Petersburg) to the United States, first Texas and then New Jersey.  When her daughter was born, her mother arrived and never left -- and much of this is the story of three intertwined lives.

Gorokhova is an expressive writer, and her story is gripping.  Having escaped the crumbling Soviet Union, she doesn't know how to acclimate to the US, and feels that she has little help.  The marriage falls apart, but Elena finds new understanding and happiness in New Jersey, and slowly adapts to American life, while always missing the Russian life that formed her.  When she has a baby daughter, her mother moves in (in fact, she has old friends all over the place, and her sister comes too).

Elena's reaction to her mother -- one of the main strands of the memoir -- is one of mingled exasperation and love.  Her mother is a doctor and a veteran of the war, a formidable person, but Elena finds her suffocating too.  She left in order to get away, but it has all followed her.

Of course, there's also a lot about history and events in the USSR, which I liked a lot.  Many ponderings on the Russian soul, memories, and feelings.  Her relationship with her daughter, Sasha, becomes very fraught as Sasha rebels and drops out of college to protest for animal rights.  (My favorite part is when Sasha tells her that she has bought a gun.  Her mom is not happy, and is really not happy when Sasha admits that it's an AK-47.)

I enjoyed this memoir quite a bit.  A nice addition to my list of Russian/Eastern European books.

I'll leave you with a bit I found funny, when a group of friends goes to a comedic performance by none other than Yakov Smirnoff:


He was about my age, and I suspected his accent was nothing but a stage prop because even my sister Marina, who has ever studied English, delivers her broken sentences with less phonetic mangling than I heard from the Concord stage.  "In America you break law.  In Russia, law breaks you!" said Yakov Smirnoff, and I realized he was cleverly capitalizing on the fact that Russians ignore articles because our native language doesn't have them.  "In America you assassinate presidents.  In Russia, presidents assassinate you."  Artie looked at me to confirm that what the comedian said was true; I was, after all, an expert on all things Russian.  I nodded, since his statement, I had to agree, was the essence of what my Motherland believed in.