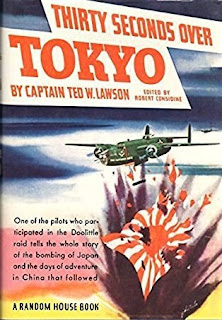 A while back, a very elderly copy of this famous book came across the donation table, and my mom mentioned that the author, Ted Lawson, lived here in our town in his later years, and is buried here.  So I figured I'd better read it!  I honestly did not know anything about this book or the events he describes -- meanwhile, my husband said "Oh yeah, that's about the Doolittle raid, right?"  Maybe!  Let's find out!  (What's the Doolittle raid?)

Lawson wanted to go into aeronautical research, and in 1940 he figured one step would be to join the Air Force to gain more hands-on experience.  So he became a pilot and flew a B-25 bomber.  He and the rest of his class volunteered for a "dangerous, important, and interesting" mission that they weren't allowed to know anything about until they were already underway.  After strenuous training, they got on to the aircraft carrier USS Hornet and were told that they would be bombing strategic targets in Japan as an answer to the Pearl Harbor bombing; the Japanese leaders were completely confident that Japan could not be bombed, because nobody could reach them, and the plan was to prove otherwise.  Since the mission was led by Lieutenant Colonel James Doolittle, it's known as the Doolittle Raid.

They had to study and memorize all the geography and make sure their planes were in perfect condition.  The careful planning was stymied when the fleet met a Japanese patrol craft, forcing the raid to start as soon as possible.  As a result, the planes were low on fuel.  They were to fly west to China and land at airfields outside of Japanese control, but Lawson's plane, the "Ruptured Duck," crashed on the Chinese shore.  The crew members were badly injured.

Local fishermen found and cared for the airmen, but Japanese troops were close by and searching for them.  The airmen had to be carried to help, and the trip took several days.  Lawson was close to death by the time they reached a missionary outpost and a local doctor, and eventually his leg had to be taken off.  As the Japanese troops moved ever closer, another long trek began -- they had to find an airfield that had not yet been destroyed or taken over.  It took months to get from the crash site to a safe haven and out of China, and then Lawson needed a lot more surgery and medical care.

Fully half the memoir is the story of moving through China with the help of innumerable locals, many of whom paid a heavy price to the Japanese invaders.  The 'thirty seconds over Tokyo' to drop just four bombs took months of training and more months of recovery, and not everyone made it back.

I really enjoyed Lawson's voice; he is just really likeable and fun to read, and reminded me of old stories I used to read at my grandmother's house -- she had books of old Bill Mauldin cartoons and whatnot.  At the beginning, Lawson has a lot of good stories, and by the end, he just keeps trying to express his gratitude to his fellow soldiers and for the people who so selflessly cared for him.

Here's a bit about his buddy's plane; the left brake failed upon landing and Bob nearly hit Lawson's own plane:


...those B-25's like to roll on forever.  He was rolling much too fast to turn to the left, for that would have rolled off his tired and tipped him over.  Finally his right tire blew out from the uneven pressure put on it.  The B-25 swung around, just short of my hemmed-in plane, and simply fell to pieces.  You should have seen those fellows pouring out of it!


My copy of this memoir was printed in 1944, and it's quite possible that newer editions have been slightly edited for language, since Lawson, of course, uses a few terms that we wouldn't now.  I'd be curious to know.  My copy doesn't have a dustcover any more, but as far as I can tell, the cover image I've put at the top is the one that it used to have.

As I said above, Lawson is buried here in our town.  Maybe I'll go visit! 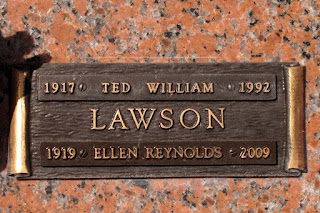