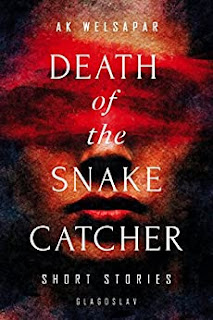 I'm always tempted by Glagoslav titles, but the trouble is they're mostly in Europe, and not that much in the US.  Anyway, I wanted to read something by Ak Welsapar, and this title is pretty tempting, don't you agree?  It's a collection of short stories, written over the decades of Welsapar's career.

That career has been a long and difficult one, because Welsapar's homeland of Turkmenistan is one of the most repressive governments in the world.  (Currently, for example, they're one of two countries claiming not to have any Covid cases.)  In the early 90s, the government -- which was newly independent from the old USSR -- objected to a novel that criticized communism.  Suddenly Welsapar's books were no longer for sale, his wife lost her job, and they had to leave for Sweden.  Given that Welsapar writes in Turkmen, it was a worrying thing to do, but instead of losing his audience, he gained a wider one.  This is only his second book to be translated into English, but I hope for more.

The short stories are all quite good, each catching a slice of a person's life, but usually without a lot of 'local color' detail -- just some every so often, focusing on the universal experience of exile rather than the Turkmen character of Welsapar's own exile.  Several of the stories are very nearly fairy tales or fables, and one is a fairy tale  -- one I'm sure I've read a version of before; perhaps his personal take on a tale that is generally told?  It's about a young man who is very close with his widowed mother, and when he falls in love with a girl, she demands the 'still-beating' heart of his mother as the condition of loving her.  When he finally gives in and kills his mother, he falls on the road and the heart asks anxiously whether he has hurt himself.

I particularly liked "One of the Seven is a Scoundrel,"  about seven working men who are bringing home a harvest.  Jummi, the leader, thinks of the old proverb (the story title), worrying that a little joking chat will be reported.  Then their truck crosses the path of an NKVD transport carrying prisoners, and the officers demand one of the seven to make up their numbers.  (Surely one of them is a traitor of some kind!)  Jummi makes excuses for each of the others, but indeed one of the seven is a scoundrel, and turns in one of the group to whom he owes money.  He spends the rest of the journey justifying his actions to himself, but it's not working.

All good stories -- this is a collection worth looking for if you can.  And, a final word from Welsapar:


People should never forget that we are only part of a great life, a cosmos, and it does not become a person to take living space from other living creatures.  Only the weak strive to destroy on another.  The strong learn to coexist.