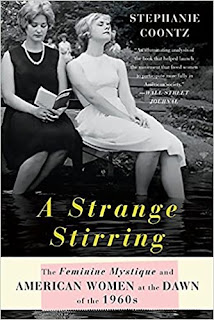 A Strange Stirring: The Feminine Mystique and American Women at the Dawn of the 1960s, by Stephanie Coontz

I've meant to read The Feminine Mystique for years, since it was so influential back in the day, but it's huge and I figured it would be boring.  When I spotted this analysis of the book, it took me a while to decide to read it without reading Feminine Mystique first.  But I'm pretty happy that I did, because Coontz is interesting and also not 800 pages long.
Coontz offers up a capsule description of the book itself, the context it was written in, the impact it made, and the book's strong and weak points -- as well as some things Friedan wasn't necessarily entirely truthful about.  It makes for pretty good reading!
She also tries to blow up some myths about Feminine Mystique.  People have often described it as a book that encouraged women to ignore husband, children, and home in favor of focusing on a full-time career, which apparently is not really accurate.  Friedan felt that the social roles women had been boxed into after WWII cheated both men and women of deeper relationships, and suggested that it would be fine if women had a range of options.   Women might like to stay home with small children, but work once they got older.
There are complaints, too, that Friedan focused on middle-class white women to the exclusion of everybody else, and seemed not to even realize that most working women were not going to have a creatively fulfilling career.  While Friedan didn't leave out everybody else entirely, she did aim the book squarely at middle-class white women for a reason, and left out any mention of her earlier, pre-war work that was all about poor and working-class people.  Friedan also painted with a very broad brush and ignored cultural elements that contradicted her thesis.
It was really fascinating, though, to read about the cultural zeitgeist of the 1950s.  While, sure, plenty of women worked, the universal ideal seems to have been for a woman to stay at home and submerge herself in her family's interests.  The kicker was that wanting anything else was, conventional wisdom said, abnormal.  Probably a neurosis.  On the other hand, American society was in terrible shape because of the scourge of over-involved mothers, who feminized their husbands and children.  That was a neurosis too.   (If you were a cold mother, that would cause autism.  Too much mothering led to homosexuality.  And mixed messages caused schizophrenia.)  So it was a double-bind -- a wonderful example of the favorite American pastime of blaming moms for pretty much everything.
The women who responded to Feminine Mystique usually felt guilty for being unhappy.  They loved their husbands and children, they had more material prosperity than their mothers had, they had easy lives, and yet they were mysteriously unhappy and couldn't explain why.  So they felt ungrateful and like something must be intrinsically wrong with them.  They knew they were privileged compared to a lot of other people, and so they blamed themselves, or thought maybe an affair was the answer?  What Friedan was telling them was that 'it's not just you; there is something wrong with these expectations.'
Some quotations:

The assignment of women to a passive, secondary role in social life, which had once been ascribed to duty, social custom, God's will, or innate differences in ability, was now declared to be a woman's only route to personal fulfillment.  Psychiatrist Helene Deutsch declared that the modern woman renounced 'originality' and personal aspiration not out of coercion but 'out of her own needs,' which were best met by identifying with her husband's achievement...
Farnham put it succinctly...Boys could not develop into successful men nor girls into fulfilled women if society made the mistake of regarding its citizens 'not primarily as male and female, but as people.'  [reminds me of Dorothy Sayers, with her essay "Are Women Human?"]
Prior to the 1940s and 1950s, a woman was condemned if she did not do what was expected of her.  In the 1950s, she was pitied if she did not want what was expected of her.
Other mixed messages abounded.  A woman was told that she should put nothing above her dovotion to her children, her love for her husband, and her delight in her home, but she was sternly warned against devoting so much attention to her family that she smothered her children and emasculated her husband.
Janice K. was 36 and the mother of ten-year-old twins when a friend sent her Feminine Mystique in 1963.  The year before, she had seen a psychiatrist for eight months without ever getting to the bottom of her 'troubles.'  She became so indignant when she read the book that she sent a copy to her therapist 'with a note saying he should read it before he ever again told a woman that all she needed to do was to come to terms with her 'feminine nature.''
Friedan actively encouraged the belief that she was writing from her own middle-class experience, speaking to the largely apolitical, white, middle-class, suburban woman because she had been one herself.
Women who attended college in the 1950s were especially likely to have been taught the 'scientific' findings of Freudian psychiatrists and functionalist sociologists that any woman who wanted more meaning in her life than she found in the kitchen and nursery suffered from psychological maladjustment...

It was a very interesting analysis, and now I feel like I'm not really obligated to read Feminine Mystique in its entirety.  Maybe one of these days.  But I hope I got a reasonable idea of it from this very interesting contextualization, which was also much shorter.
Feminist history TBR challenge