The Castle on the Hill 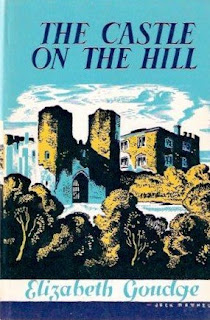 The Castle on the Hill, by Elizabeth Goudge
I acquired this book sometime last year and saved it for a special treat.  Or for Elizabeth Goudge Day, but I wasn't very good at that event, and the publisher moved its interest to Instagram, and I wound up skipping it.  (Am still up for next year, maybe?)  Anyway, a global pandemic seemed like a good time to enjoy a new-to-me Goudge title.  This one was published in 1942, in the middle of the war, and probably everybody needed a nice uplifting read right then.
It's 1940, and Miss Brown is homeless and jobless, at her wits' end to find a solution.  She's not wanted for war work, and all she's ever done is run a boarding house -- and there are a lot of people looking for jobs as housekeepers.  A train journey gone wrong brings her to Torhaven, in the West Country, where several mismatched people have been washed up by the war: a destitute Jewish refugee; a daring pilot and his brother, a dedicated pacifist; and two evacuee children.*  These strangers all find a haven at the castle on the hill run by the lonely, elderly Mr. Birley.
It's a lovely story, though it stretches coincidence much too far and is not in the least probable.  Doesn't matter.  There's a romance and several tragedies and plenty more.  While I wouldn't put it on par with Goudge's best work, it's a good book to nestle up with and live in for a while.  I got to about page two and realized that my friend (the one I sent Coronation Summer to) would probably love it, so I ordered a copy and am going to convert her to Elizabeth Goudge.
______________________________________
*As my mom wryly commented, round up the usual suspects for a war novel!