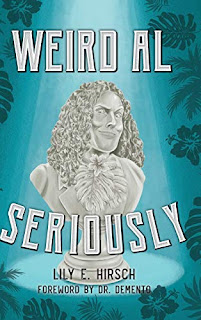 While I cannot say that I am a serious Weird Al fan the way that some people are, I am quite fond of him, have some favorite songs, and have seen him in concert more than once.  And of course we like to watch (and quote) UHF around here.  So when this book was published, I put it on my mental list of books to read.

This isn't really a biography or anything; it's much more an analysis of Weird Al's music.  Hirsch interviewed Al (who seems to have a well-developed sense of privacy, go Al), but also does a lot of solo pondering.  She dives into the playful -- but sharp -- nature of the songs, Al's frequent inversion of tropes according to what kind of song it is, and his ability to be critical without anybody noticing.

If you're not too familiar with Weird Al, he does a bunch of different things; most famously, direct parodies of particular songs, but he will also do parodies of song genres.  So there's a truck driving song (in which he sings about wearing high heels), a doo-wop breakup song (about the tortures he's willing to endure in order not to ever see her again), and even a marching band fight song.  Then there are just funny, silly songs.  And polka medleys, in which several famous songs are smashed together and polkified.

Weird Al also has an iron-clad reputation for niceness, which Hirsch both confirms and interrogates.  Indeed, Al is polite and pleasant to all, and always asks permission for parodies.  But if you know his lyrics, they can be pretty violent!  The more violent the words are, the more likely they are to be paired with an upbeat, light song style -- and they also have a critical point, which is usually appreciated even by the target.  Listen to "Party in the CIA," for example.  And his songs only rarely touch on any innuendo, which probably has something to do with it.

I was surprised to see that Hirsch never really commented on "Fat," the parody of Michael Jackson's song "Bad."  I thought that would be a pretty rich field.  It was made in the days before Al went vegetarian, and wasn't quite as thin as he is today, but he was never overweight.  He still performs in the famous fat suit, though.   So have people considered it a mean-spirited song?  In my experience, it's been adopted (at least by the fans) as something of a fat pride anthem.  I mean, you haven't lived until you've experienced an auditorium full of people, 70% of whom are on the pudgy side (including me), pumping their fists in the air and screaming that they, too, are fat.

The author invites us to listen to the songs while reading, but I couldn't do that.  I can't listen well to a complicated song with a lot of wordplay and simultaneously read a biography.  So I listened to the songs when I wasn't reading, and met up with quite a few I'd never heard before -- or maybe I hadn't seen the videos.  I've also had "One More Minute" stuck in my head for about three days now...

So I had fun with this serious/non-serious look at comedy and its implications.  Anybody who has enjoyed singing along to "Amish Paradise" would enjoy it.  Do you have a favorite Weird Al song?

Heather said…
It is a point of pride for me that I still know all the words to Biggest Ball of Twine in Minnesota.
May 6, 2021 at 5:04 AM

Jean said…
Heather, that is a really impressive feat! I love that song but I couldn't hope to sing along.

Lory said…
Oh, maybe I should get this for my son! He loves Weird Al and is always asking me what the words in his lyrics mean. His vocabulary is quite astonishing.
May 6, 2021 at 10:06 PM