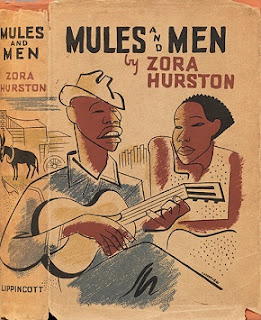 I particularly wanted to read Mules and Men this month as part of Erica's Zora Neale Hurston reading project.  That was the title that I most wanted to read; published in 1935, it represents her anthropological work, in which she collected African-American folktales, legends, and practices.

There are ten chapters of folktales, in which Hurston narrates her trip and experiences as well as the stories she collected.  She starts in her hometown of Eatonville, where she is known, and has to convince people to tell her "lies" -- which, while entertaining, are not considered worthwhile.  Once the local fellows are in on the project, they take her to parties and dances, and she moves ever further out, visiting a logging camp and a gambling club, among other places.  Hurston collects songs, most especially "John Henry," which must have become a staple folksong in schools somewhat later; it was the sort of song we were all taught when I was a kid, but Hurston feels it necessary to explain who John Henry was.

The stories Hurston collected are fantastic.  There are tall tales, where the men one-up each other, just-so stories explaining why things are as they are.  John, or sometimes Jack, is a favorite hero, strong and clever -- 'back in slavery times' he always got the better of Ole Massa in some wonderful fashion.  I also enjoyed the stories featuring Biblical characters, and of course God features as often as John does.

Hurston always (as far as I know) wrote dialogue the way it sounded, which isn't necessarily very fashionable these days.  These stories just would not be the same without the proper expressions.  I get to read the story in the way it was told, and it's a much better experience that way; I could almost see the storytellers and hear their voices.

After the folktales, the scene changes completely.  Hurston travels to New Orleans to learn about hoodoo (!).  She describes hoodoo as a "worship bound in secrecy."  People don't admit publicly to practicing, and they certainly don't have big ritual dances as depicted in popular fiction.  Hurston insists that most conjuring is done in secret and is not talked about.  She then apprentices herself to several hoodoo doctors, one at a time, and becomes qualified from each one.  Hurston describes some practices and some initiation rites, and she has a list of popular remedies, but she keeps quite a bit to herself.  She is very cagey about her own beliefs, but when she makes a judgement about whether something worked, she says it did.  It's honestly somewhat disturbing, because it's sometimes something harmful.

This is an amazing work of anthropology, oral literature, and writing.  Don't miss it.

Jenny @ Reading the End said…
Oh man, I really need to read this. I haven't read any Zora Neale Hurston since college, but she was one of those assigned reading authors that just felt like such a joy and a discovery for me. This book sounds fascinating.
May 18, 2021 at 4:45 AM