It's time to prepare for what has become an essential summer event: the 20 Books of Summer, hosted by Cathy at 741 Books!  As a summer event, the rules are practically non-existent, and I've tried to pick out a nice mix of TBRs, international reads, and books about WWII.  And of course it's important to include a title or two for WIT Month in August! 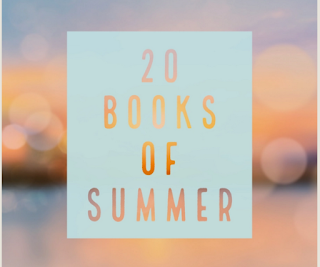 So here are my picks -- 20 titles, plus two alternates:

I'm really pretty excited about my pile, though I have a hard time thinking that I'll need those alternates.  Maybe if The Summer Tree turns out to be a dud -- it's the first in a fantasy trilogy I've never heard of (The Fionavar Tapestry??), and the covers are very early 80s.

Summer here is very hot, so it's important to have lots of books to read in the shade!

reese said…
I liked the Fionavar Trilogy--it's very Toronto, at least at the start--though I've liked Kay's other books even more. There's a bunch of these I'm curious about. Connecticut Yankee is a lot of fun!
May 10, 2021 at 9:37 AM

Karen K. said…
Great list! I also have Millions Like Us on my TBR pile, I should read it this summer. It would count for both my WWII challenge and the Big Book Summer Challenge (assuming it's on again).
May 10, 2021 at 10:14 AM

Jean said…
Hey, that's good to know, Reese! I visited Toronto in about 1985 so I'll be able to imagine it just right. :) I'm excited about Connecticut Yankee too -- I have read it before, but a good 25 years ago, and I have the edition with Trina Schart Hyman's illustrations. I love TSH so much.

Cathy Brown said…
Thanks so much for joining in this year! It's a bit mad but I know Namita Gokhale as I organised a fedtival with her in 2019! Look forward to hearing what you think of her book.
May 10, 2021 at 1:58 PM

Jeanne said…
Drive Your Plow Over the Bones of the Dead is an amazing book, and maybe a good one to read in the summer, when the atmosphere will be less fraught (at least I think so, as I love summertime). https://necromancyneverpays.wordpress.com/2020/02/14/drive-your-plow-over-the-bones-of-the-dead/
May 11, 2021 at 7:14 AM

Ellie said…
I wish I had a guaranteed hot summer, I'm just hoping for a few dry weekends so I can sit outside and read! Good luck with the challenge.
May 15, 2021 at 7:52 AM

Cleo said…
Oh, Ring of Bright Water made my cry. I would vote for The White Witch but there are many here that I haven't read. Looking forward to your thoughts on them.
May 16, 2021 at 10:41 PM

Maphead said…
Drive Your Plow Over the Bones of the Dead, by Olga Tokarczuk is on my TBR. I LOVED Are We Smart Enough to Know How Smart Animals Are? Hopefully I'll have my 20 Books of Summer posted by the end of the week.
Enjoy!
May 17, 2021 at 4:38 PM

Deb Nance at Readerbuzz said…
I have quite a number of alternative titles, and I think that's okay. Who wants to read a book they are not enjoying/appreciating?

curlygeek04 said…
I really liked Drive Your Plow - and the author herself is pretty fascinating. I hope you enjoy your books of summer! I'm debating joining this challenge; I enjoy it but I'm avoiding book lists this year just so I can be a little more relaxed about what I read.
May 22, 2021 at 12:30 PM

amanda @ simplerpastimes said…
You always have such interesting lists! It reminds me I've never read Goudge, though, something I should rectify. I understand needing good books for hot weather reading - I don't believe it gets as hot in my area as yours, but I don't tolerate the heat well, so a good book in the summer is always appreciated. Enjoy!
May 23, 2021 at 12:17 PM

Jean said…
One of the great things about this challenge is its summer-appropriate loosey-gooseyness. Do whatever you want! So you should all join me.

Amanda, I bet you would enjoy a Goudge novel. She wrote some amazing children's books as well, and The Little White Horse is quite easy to find; I'd recommend it as a starting point.
May 23, 2021 at 9:53 PM