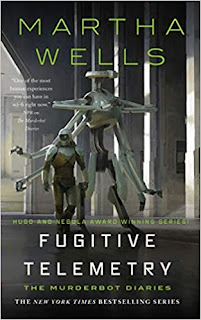 Murderbot is back on Preservation with Dr. Mensah, and finds a dead body in an empty hall.  Its immediate concern is to solve the murder in order to find out whether Mensah and the rest of the family are under any threat from GrayCris or another corporation, but Preservation's security teams are less than thrilled at the prospect of working with Murderbot in any way.  Mensah, knowing that it will be good for both parties to get to know each other, pretty much forces them to work as a team.

So: who is this dead human?  Who killed him, how, and why?  Indah, leader of Preservation security, is not all that experienced with murder and possible corporate nefariousness.  (Nefarity?  I don't think either of those are words.)  Murderbot is sure that Indah will only get in the way, but has to work with her because it promised not to hack all the computer systems on the station as a condition of residency.

Will they figure things out?  Who did kill this guy?  The answers are found in yet another excellent and snarky Murderbot tale, which is also practically a Golden Age murder mystery of the locked-room style.  It's short enough that you can just sit down and read it in one good immersive session, which I didn't quite get to do but it was close.

So much fun, and a worthy addition to the Murderbot list.