The Luck of the Vails 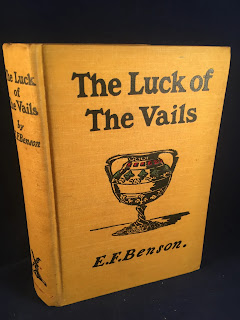 The Luck of the Vails, by E. F. Benson

I appear to be on an accidental Benson kick.  A couple of months ago, I read a volume of his horror/ghost stories, which was very good.  It was completely unrelated that I also listened to a podcast about E. Nesbit's story The Enchanted Castle, which put me in the mood to read it again.  In it, Mabel mentions that:

"There's a yew-hedge with a passage along its inside like the box-hedge in 'The Luck of the Vails.'"

"'The Luck of the Vails.' It's a ripping book. It was that book first set me on to hunt for hidden doors in panels and things."

And, owing to the magic of the internet, I realized that I could find out if a book called that really exists (Nesbit's book mentions generally do exist), and if it's any good.  And it does, and it is.  In fact, it's a very entertaining novel!  And an odd one.

It is just about 1900, and Harry Vail is getting started running the family estate; of course there's hardly any money and lots of needed repairs.  His buddy Geoffrey is staying, and his great-uncle Francis is coming to live at Vail too.  Francis has spent most of his life abroad after a tragic accident ruined his life, but he's a very friendly, kind old man and everybody decides that of course, the accident was not his fault. 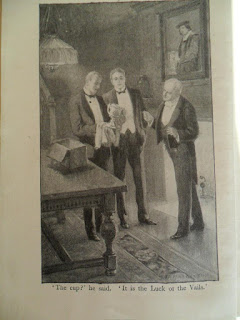 Meanwhile Harry has been rummaging around in the attic, and he finds the Luck -- an antique jewelled goblet, complete with prophetic inscription, that has appeared and disappeared throughout the family history.  Those who find it must beware of danger from fire, frost, and rain, but may also profit greatly.  Harry doesn't believe in the Luck...or does he?  He certainly faces danger from three sources, and then his luck is in; he falls in love.

There are indeed hidden doors and passages, plots and intrigues and accusations.  It's an adventure story and a mystery, and it's witty too.  It's interesting, because the novel reads like a straightforward Edwardian story, but (given the tone of the novel) it unexpectedly turns into this wild adventure.  No wonder Mabel thought it was a great story.

I had a lot of fun with this one.  It's just a delightful story.  Highly recommended to lovers of secret passages!