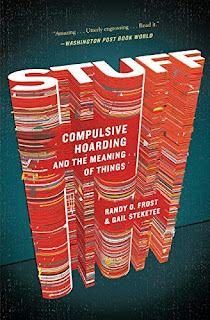 Stuff: Compulsive Hoarding and the Meaning of Things, by Randy Frost and Gail Steketee

As a somewhat messy person who collects books and fabric, I've often worried about becoming somebody with too much stuff.  This was especially true when the kids were younger and we also had tons of homeschooling paraphernalia, and I had a really hard time with keeping things clean and organized (I found that we could have only two of three at any one time: good homeschooling, a reasonably clean house, or reasonable meals.  All of them at once were not humanly possible.)  I would sometimes watch shows like "How Clean is Your House?" or "Hoarders" in order to motivate myself to clean, despite the twinge of conscience I experience from exploitative shows like that.

The kids are older now and I've much improved my housekeeping/decluttering skills, so that I'm fairly happy with my stuff level.  (I recommend Dana White's blog/podcast/books; they have helped me tremendously.)  But I'm still very interested in the whole thing, so when Stuff showed up around my folks' house -- I think my niece was reading it -- I grabbed it to read.

For a long time, psychologists paid little attention to hoarding.  Only a few famous cases, such as the Collyer brothers, made the news, and it was thought to be a very rare problem.  Well, it isn't; hoarding is very common, and it's still not all that well understood.  It shares some characteristics with OCD, but it's different too, not just a subset.  It's often a manifestation of trauma, attachment difficulties, or avoidance.  And it's really really hard to solve; the longer it goes on, the more cemented it is.

Frost and Steketee have made hoarding a team specialty.  Frost is an expert on OCD, hoarding, and perfectionism; Steketee is an expert in social work.  Together they've researched and published on hoarding for quite some time.  In this book, they talk about a lot of different flavors of hoarding and the motivations behind the behaviors -- people hoard nice stuff, reading materials, plain junk, and, most tragically, animals.  Children sometimes exhibit severe hoarding.  And in all cases, it seems that if it can be properly treated early on, it's a lot easier for the person to learn to cope with decision-making.

Pro tip learned here: if your psychiatrist starts talking about how her fellow psychiatrists do not understand her brilliance, and she generally sounds like Bela Lugosi in an old B movie, get out fast, before she drags you into a cat-hoarding cult and ruins your life.

I thought it was a fascinating book, well worth reading for anybody interested, or with a hoarder somewhere in their lives.

And now that I'm done with this book, I won't keep it; I'll take it down the street and put it into the Little Free Library.

bookertalk said…
I know jokes are sometimes made about people who can't get rid of stuff (like my husband who hates throwing out boxes) but that's not really what this book about is it? As you say, if not treated it can have some serious repurcussions.
May 3, 2021 at 1:38 PM

Jenny @ Reading the End said…
Ooh this sounds VERY interesting. I too am constantly worried about becoming a hoarder -- not so much of books, because I am pretty good at doing culls, but of other stuff (unspecified). I have hoarders in my family so it's definitely something I think about.
May 4, 2021 at 6:34 AM

Jeanne said…
I also wonder when/if I'm going to cross the line with piles of stuff, so I might be interested in this book. I love your last line, about donating it!
May 4, 2021 at 7:28 AM

Jean said…
Mom has the book now, and I'd have to look at it to remember the name. Some decades ago there was a psychiatrist in NYC who started off normal enough, but she kind of gathered a bunch of followers that she used as free labor. She was convinced that her colleagues didn't understand her brilliance. She bought a 7-story building to turn into a community center, but instead she filled it with stuff and cats. She told her people that only they truly understood cats, and it was their collective mission to save the cats, so they all collected cats and spent all their time caring for cats. She believed that cats deserved to live full lives, so fixing was verboten, and so pretty soon everybody was completely overrun with sick cats and kittens.
May 10, 2021 at 12:10 PM