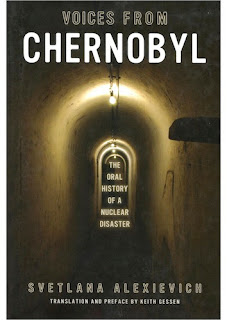 Voices From Chernobyl: the Oral History of a Nuclear Disaster, by Svetlana Alexievich

Svetlana Alexievich is a major presence on my mental TBR shelf, and I was really sorry I didn't think to put this on my 20 Books of Summer list.  I wanted to start here and then move on to Secondhand Time and her newly published (in English) Unwomanly Face of War.  This is not her entire output; there is also Zinky Boys, about Soviet soldiers in Afghanistan, so there's plenty to read.

Alexievich is a Belarussian journalist who has made it her life's work to collect testimonies and oral histories of the USSR.  She arranges them in a collage sort of form to communicate the emotional history and impact of the events described.  She's been doing this kind of thing since the early 1980s, but much of it was repressed under the Soviet government, and then Lukashenko's Belarussian government persecuted her as well, so that she had to leave from 2000 - 2011. In 2015, she was awarded the Nobel Prize for Literature "for her polyphonic writings, a monument to suffering and courage in our time."  Alexievich says:


"If you look back at the whole of our history, both Soviet and post-Soviet, it is a huge common grave and a blood bath. An eternal dialogue of the executioners and the victims. The accursed Russian questions: what is to be done and who is to blame. The revolution, the gulags, the Second World War, the Soviet-Afghan war hidden from the people, the downfall of the great empire, the downfall of the giant socialist land, the land-utopia, and now a challenge of cosmic dimensions - Chernobyl. This is a challenge for all the living things on earth. Such is our history. And this is the theme of my books, this is my path, my circles of hell, from man to man."

On the 26th of April, 1986, the Chernobyl nuclear energy plant had an uncontrolled reaction, leading to a steam explosion and graphite fire.  It was a combination of corner-cutting, incompetence, bad design, and all sorts of things (including deliberately turning off some safety features, because they were running a drill) that led up to the accident.  The response was not properly done either; ordinary firemen responded to the fire, and hardly anyone had the right gear.  Political leaders were ignorant of the real dangers and mainly interested in...well, covering it up.  They didn't want outsiders to know what had happened, and they didn't want other Soviet republics to think they couldn't take care of their own problems.

The collected voices from Chernobyl -- taken ten years later -- bear witness to the terrible ignorance of most of the populace, and to the awful suffering that resulted.  Ordinary people didn't know about the dangers of radiation leakage; they were conversant with the idea of nuclear bombs, but they didn't know that a meltdown would poison everything around them.  And how do you believe that the landscape is poisoned when it's so obviously a beautiful spring, and there's planting to be done?  The leaders weren't a lot better off; when a physicist tried to warn them, the reaction was a blank "But the fire is out."

One of the most striking things about many of the stories, besides their horror, is the great strength of the connection people felt to their land.  Many of the people who were forced out lament their beloved homes and feel so uprooted that they can't get used to the new places. Hundreds of villages were emptied and buried, but some people remain in the worst areas.  In fact, it seems that some political refugees moved in over the years, seeing radiation as less of a threat than the war they had fled.  Although it has been 20 years, today, about a fifth of the population of Belarus lives on poisoned land.  Illnesses and deaths from radiation-caused problems have increased, since everyone is constantly taking in low doses.

This is another in my collection of crucial books to read, but not because they are fun.

What do you remember about Chernobyl, if you are old enough to remember it?  I was in 8th grade, and I remember it well, because a girl in my school was scheduled to go to Russia with a choir, on one of those goodwill trips, and it was canceled.
books everyone should read history politics read around the world Russian literature