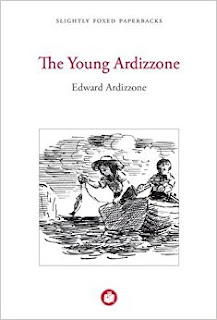 The Young Ardizzone, by Edward Ardizzone

I shall now dip my toes back into book blogging with a delightful little volume -- Edward Ardizzone's memoir of his younger years.  I grew up on Ardizzone illustrations, what with Little Tim picture books* and The Little Bookroom.  When Lori mentioned this volume in her post about Slightly Foxed Editions, it promptly went on my wishlist...but they're only available in the UK.  Happily, my mom went on a trip to London in June (she accompanied my brother and his family, and thus saw a lot of Harry Potter attractions!) and she went armed with instructions to hunt down a couple of these.

Edward Ardizzone was actually born in what is now Vietnam, in Hai Phong.  His father was Italian and French, and his mother British, and Ardizzone says they were each very good people, but totally unsuited to each other, and so they frequently lived apart.  His mother took them to England when he was five, and they lived a somewhat unsettled existence -- sometimes with their grandmother, and moving every so often -- probably much like many other middle-class colonial families of the time.

Ardizzone was known as Ted, and he candidly says that he was the kind of boy who was an obvious target for bullies.  Teachers did not like him and school was frequently a torment, or at best no fun at all.  Nevertheless, many other things were good, and he writes about childhood in Edwardian England in wonderful detail.  He has adventures with his siblings, cousins and best friend, exploring the docks and surrounding countryside. 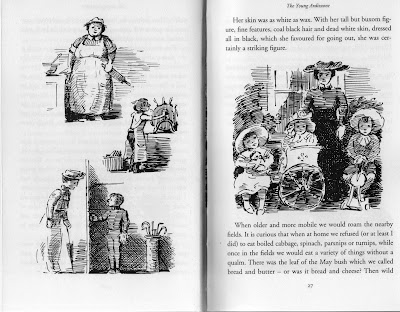 Naturally, the book is profusely illustrated!  They really bring the little stories and vignettes to life.

I couldn't help but love this memoir.  I feel lucky that I was able to get hold of a copy!