By Jean - September 08, 2017
It only took me over a year, but I have done it!  I finished the Faerie Queene!  Woohoo!  I do wish Spenser had been able to finish his great work, but I don't know if I could have read all of it. 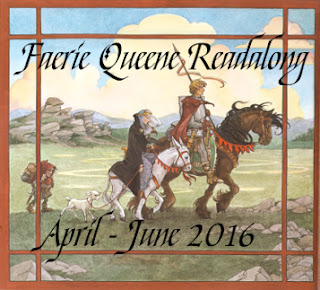 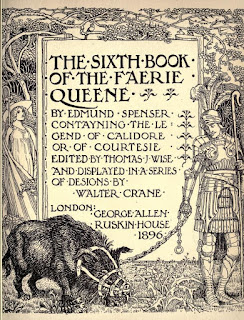 When we stopped last time, it was right after a fight in a castle between Arthur and Turpine (the bad guy).  Turpine now wants revenge, and he meets two knights, who he talks into pursuing Arthur.  They attack, and Arthur kills one before the other cries mercy and informs on Turpine.  Arthur kills Turpine and hangs him from a tree.  Arthur is really getting pretty violent!  Meanwhile, Serena and Timias (remember them?) meet Mirabella, who is the messy maiden from a couple of cantos back.  She is beautiful, but of low birth.  Her pride has led her to be cruel to many men, so Cupid has decided to seize control and teach her a lesson (normally, remember, Cupid shoots his arrows at random, so the natural order is being overturned here).  Her penance is to save 22 loves, but in two years she has only managed to save two.  Then a giant, Disdaine, follows and attacks her, so Timias fights him, but is overcome.  Serena thinks he is dead, and flees.

Arthur and his new companion, Enias (! Is this a reference to Eneas?) meet a knight and lady berating a Squire.  There is some rather confusing fighting where Arthur defeats Disdaine and Mirabella explains herself.  Serena, meanwhile, is riding her horse, complaining, and when she goes to sleep, a band of cannibals find her!  They plan to sacrifice and eat her.  (Some would also like to ravish her first, but their priest says no.)  Luckily, Calepine has been searching for her and he finds and rescues here, though he does not recognize her until the next day, whether because it was dark or because she was naked...maybe both? 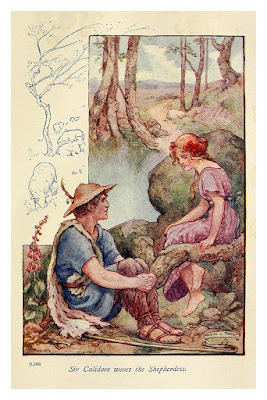 Back to Calidore -- whose book this supposedly is, though we haven't seen him for ages -- he is pursuing the Blatant Beast.  He meets some kindly pastoral shepherds, who are gracious and feed him.  Pastorella is the prettiest maiden there and all love her, especially Coridon, but she is ambitious and looks higher.  Calidore falls for her.  Her adoptive father, Meliboe, comes to fetch her home and invites Calidore to stay.  The knight is enchanted by Melidoe's description of shepherd life, and wishes to become a shepherd and marry Pastorella.  Meliboe warns that his job is to guard the shepherds' safety and do knightly deeds, but Calidore is oblivious and begs to stay.  He even (dishonorably) tries to bribe Meliboe with gold, which is refused.  He tries to woo Pastorella with courtly courtesy, but she doesn't understand it, so he becomes a shepherd.  A very polite shepherd.

Calidore the shepherd finds a lovely place; this is Acidale, another favorite spot of Venus'.  He spies on over 100 naked maidens dancing to piping music, with the Three Graces in the center accompanying a lovely maiden, who is the partner of the musician.  (This is "Colin Clout," Spenser himself!)  When Calidore comes out of hiding, the nymphs vanish, leaving only Colin to explain that these are Venus' graces.  (And the knight of courtesy has just driven them off -- uh oh.)  Calidore apologizes and goes home to Pastorella.  On another day, everyone goes out strawberrying, and a Tiger attacks Pastorella!  Coridon runs away in fear, but Calidore kills it with his staff.  Now Pastorella begins to favor Calidore, to Coridon's fury.  But then (as Calidore is absent) Brigants appear and pillage the whole place, taking them all into slavery.  The poor shepherds are taken through an underground passage to the Brigants' island, thus foiling pursuit.

Poor Pastorella, in prison, catches the head brigand's eye, and he courts her with gifts and threats.  He never stops bothering her; she can't even sleep!  So she eventually allows him to hope, in order to gain time, and then she pretends to get sick.  Slave traders show up and the brigands decide to sell most of the captives, but now both parties want the maiden, so there's a big fight.  Many of the helpless captives are killed, including Meliboe, but Coridon takes the opportunity to escape.  Pastorella is the sole survivor.  He finds Calidore, who is nearly mad with grief, having come back to a burned-out village, and together they go and save Pastorella. 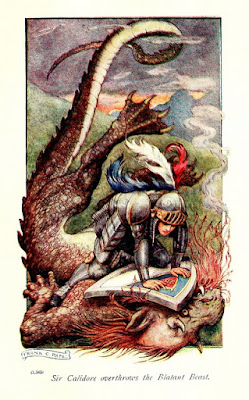 They take the maiden to the castle of Sir Bellamoure and his wife Claribell, so there's a digression into their story; they wed secretly and were imprisoned by Claribell's angry father, but bribes to the guards and the maid resulted in a baby girl, who was then smuggled out to foster care.  The baby had a little purple birthmark like a rose on her breast,* and she was adopted by shepherds.  Calidore finally remembers that his actual job is to pursue the Blatant Beast (if he'd kept to it, the shepherds might have been safe), so he departs.  You will not be at all surprised that Claribell's maid, Melissa, sees the rose birthmark on Pastorella.  Everyone is joyful!  But Spenser has only a small space to finish this story in, so we have to hurry on to Calidore, who finds the Blatant Beast despoiling a monastery (possibly an allusion to Puritan iconoclasts, though Cromwell is as yet only a small child).  The Beast has a mouth with a thousand tongues!  It never stops talking or emitting its poison.  After a grand battle, Calidore ties the Beast up and leads it to Fairyland, where it is kept captive.  But long afterwards it breaks out again, and has never been caught since.


I'm sort of stunned by how fast Spenser winds this up.  He spends forever meandering around Book VI, bringing in a cast of thousands, and then crams the Blatant Beast and Calidore's victory into the very last bit.  On the whole, it's a confusing book; I had to look up synopses a couple of times to find out what was going on, and I kind of suspect that even Spenser mixed up his two similarly-named knights at one point.  Also, I really like the Blatant Beast and wish it had appeared a little more.

I was going to talk about the Mutabilitie cantos too, but this is already too long, so....wrap-up will be next time!