By Jean - September 04, 2017
I thought it would be fun to tell you about our trip to Oregon for the eclipse.  If you don't think that would be fun, feel free to skip this post, though I will tell you that it does also have its literary moments!

We stuffed five people -- our two kids, plus my dad -- into my little CRV, as well as equipment to survive anything up to an apocalypse.  We kept hearing about the terrible congestion that was going to happen, so we planned to be able to live out of the car if we needed to.  Our original plan was to drive to a small town on the southern side of the band of totality where my sister-in-law spent some years of her childhood.  She still knew a few folks and we figured on having reasonable access to plumbing there.  But first, we planned to spend a couple of days in Portland at my brother's place.

So we drove allll day, and it was quite a good drive except for about half of it involving a lot of smoke from wildfires.  We couldn't really see Mt. Shasta, and Oregon's forests were more gray than green.  We got to Portland just fine and said goodbye to my brother, who was leaving for New York State early in the morning to visit his fiancee's family.

We spent Saturday looking around Portland a bit, enjoying the fantastic weather and the pretty great public transportation; we took a light rail, a tram, and a sky tram thing.  Said brother works at the university hospital, which is on top of a steep hill dedicated entirely to medical complexes and not parking, so there is this little sky pod thing to take everyone up and down.  It was a really fun ride, with a fabulous view. 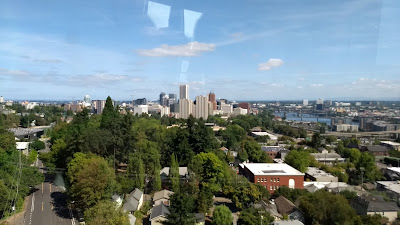 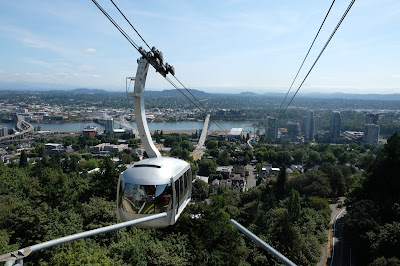 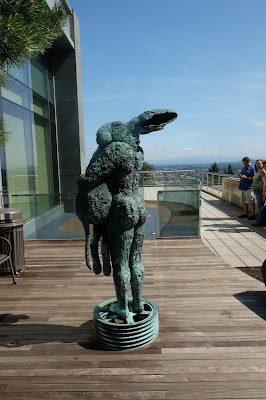 And this statue was familiar; we saw a lot of these at Salisbury Cathedral last year!


We then took a tram to the Portland Public Library, which is in a lovely old building that was recently refurbished.  It's wonderful.  Go to the Portland Library!  Of course, I especially liked the Beverly Cleary Children's Room, but everything else was great too.  And they've made a work of art out of the stairs. 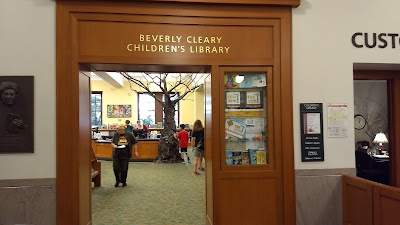 After that we got gyros from one of the zillion food trucks around.  Portland is famous for food trucks.  And we had to stop in at Powell's Books, but unfortunately so did everyone else that day.  I'm sure it's a nice bookstore, but it was so crowded it was impossible to tell.  You couldn't look at a bookshelf without a stream of people walking through.  It was more like Disneyland than a bookstore, though I will say that it had a wonderful section of Tintin and Asterix comics.

Sunday, we drove out to Multnomah Falls.  My brother and his fiancee had warned us to get there early, and boy were they right!  We got one of the last parking spots.  Multnomah is not a large waterfall in volume, but it is very tall and very beautiful.  It falls in two stages, a long first drop and then a shorter second one.  It's an easy walk up to a bridge that crosses over the second, shorter fall, and after that there is a much steeper hike up to the top, which we were not really prepared for.  We just enjoyed the view. 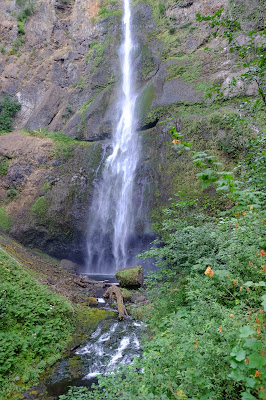 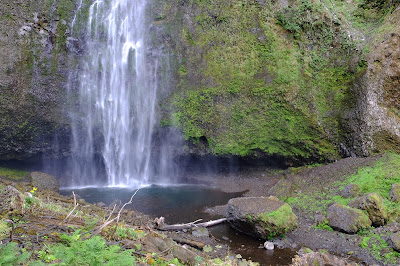 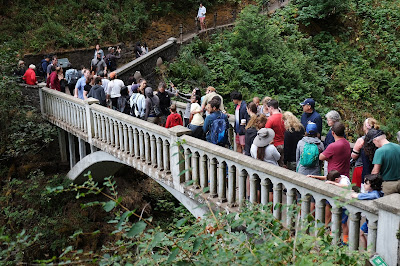 This spot was very crowded too, and by the time we left, there was a line of cars a good half-mile long, waiting to get in.  We were sure glad we'd come early!

After that I insisted on a pilgrimage to Klickitat Street, which is a real place.  In Beverly Cleary's books, it's where the Quimbys (and the Hugginses, and the Kemps) live.  So we went to a nearby park, which has a "Beverly Cleary Sculpture Garden."  This turned out to be statues of Ramona, stuck in the mud, with an exasperated Henry Huggins and Ribsy nearby.  It looks to be a fountain, but the water was not turned on.  Then we drove to Klickitat Street, which is of course a perfectly ordinary street of houses. 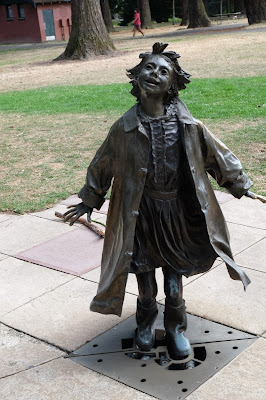 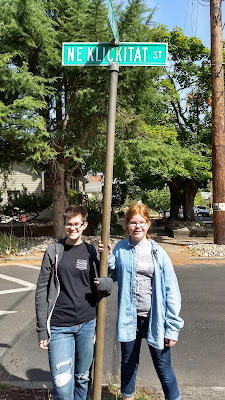 We tried to go to bed really early Sunday night, and planned to get up at 3am so as to leave around 4.  We were very worried about getting stuck in traffic -- not just eclipse traffic, but also the ordinary Portland morning traffic.  We were therefore out of the suburbs before 5am.  Traffic was clear the whole way, except a little busy in Salem, where totality was going to last longest.  Clearly a lot of people wanted to be in Salem.  And we saw a rest stop near there that was jammed full of cars (you can't camp at a rest stop, but you can stay up to 8 hours.). We had food enough to last for a whole day, and everything else we could possibly need....and every bit of it turned out to be unnecessary!  Ha!

You see, we had planned to just spend the day in this small town, hanging out in a park or something, and our best hope was to have access to a bathroom.  But the guy my sister-in-law was talking with just wound up inviting us to his house!  He invited seven strangers, and one acquaintance from childhood, to come watch the eclipse at his home.  So when we left Portland, we were really headed to this guy's house, which was ideally situated on a ridge with a spectacular view over a valley: 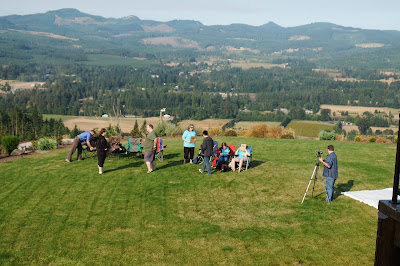 We got there at about 6am, and just stayed in the car for a while.  Sister-in-law and her family had not arrived yet from Eugene.  A teenager drove up to the garage, waved in a friendly manner, and disappeared.  Around 7am we knocked quietly and he let us in, and pretty soon we were having an eclipse party.  Our hosts started making pancakes with home-grown blackberry syrup, and scrambled eggs from chickens.  We discovered tons of things in common, what with the chickens and the bees and the timber growing, and it even turned out that he'd lived in Denmark right after I did!  We knew people in common!

We got started setting things up.  Everybody had glasses; I'd also made full face shields out of cardboard with cutout spots for my favorite welding glass.  I really dislike sun on my face for any length of time and am much happier with a nice shield.  We also had binoculars with filters on, so that we had a great view of the sun complete with sunspots.  Everybody could take turns with those. 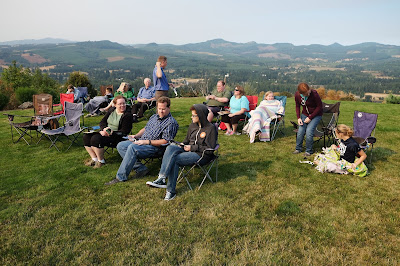 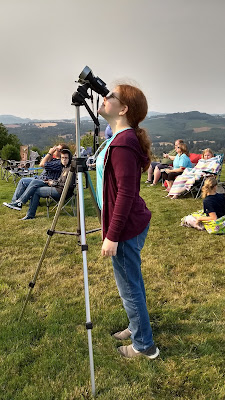 It took a while for things to get strange, but gradually everything got darker.  The cat got nervous and prowly, and it looked like twilight.  It really got quite chilly!  We could see lights come on all the way down the valley.  We were hoping to see the eclipse shadow come sweeping up, but the slight haze of smoke made that impossible.  At totality, it was like nothing we'd ever experienced before.  The sky was darkish, but it looked like dawn at the horizon, all the way around.  We could see a reddish, really kind of magenta area at one side of the corona.  The moon over the sun was actually darker than the rest of the sky, I think because of the smoke.  It was amazing. 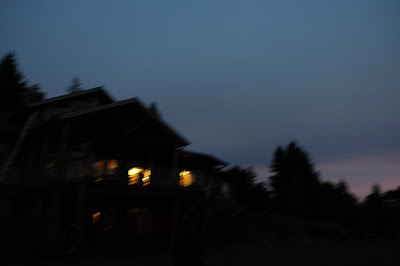 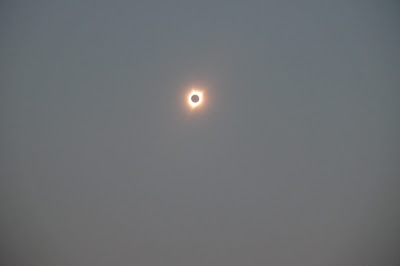 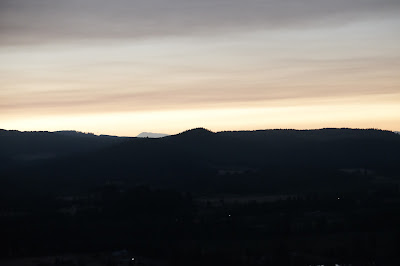 We didn't really try to take great pictures.  We knew that lots of other people would have fancy equipment to do that with, so we mostly just wanted to enjoy the experience.


Afterwards, we knew we had to hit the road as soon as possible; it was a long way home, and there was school and work in the morning!  We actually missed the first day of school for the eclipse.  The traffic was heavy but not too bad for most of the way, except that there were a few accidents near Medford, so that was awful, and then Weed was having road construction.  That part was brutal.  It took us 11 hours to get home and we were beat!  But it was so worth it.  The chance of a lifetime.  Wow.