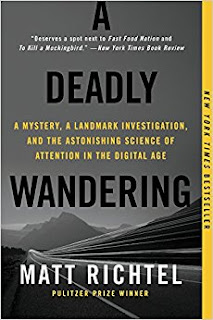 A Deadly Wandering, by Matt Richtel

The start of a new school year means a new Book In Common in our city.  The university and the community college cooperate to choose a book, get people interested, and have the author come and speak.  I don't always read the BIC pick, but this year's title piqued my interest.  And I was pretty entertained when my older daughter came home and said it was on her English syllabus, so could we get a copy?  And I flipped over the book, which was right on the table.  Heh.

In 2006, people were just starting to use texting on cell phones to communicate when Reggie Shaw, a very ordinary nice kid from Utah, drifted a bit across the center line and caused a car accident that killed two men -- both scientists with families.  It wasn't immediately clear how it had happened, but Reggie was a habitual texter.  The investigation and findings turned into a landmark case, showing that texting while driving is much more dangerous than anyone had (at that time) realized.

Richtel intertwines three (sometimes more) plotlines, following Reggie, victim advocate Terryl, and the development of the science of attention.  It's interesting, often riveting, and thought-provoking.  How many of us look at our phones while driving?  Texting turns out to be especially dangerous, grabbing our attention away from the road, but there are plenty of other screen-based distractions as well.  Newer cars are even putting screens on the dashboard; our culture tells us that multi-tasking is good.  Well, maybe it isn't always.

An informative read.  But if you want the TL;DR version: don't text while you drive.
non-fiction science