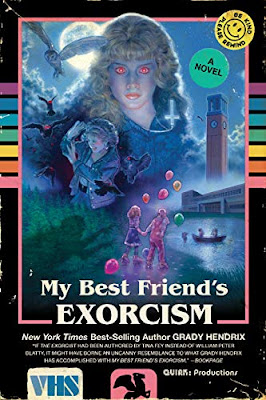 When I saw this book, set in the 80s and obviously riffing on the popular worries about Satanism, I just had to get it.  I mean, look at it!   It's got a VHS cover and everything about the design is perfect!   The Kindle version comes with a link to a Spotify playlist to listen to, and claims to have animated cover art, though I certainly didn't find it.  Some of the fun extras were in fact a little tricky to find, so look carefully.

It's 1988, and Abby is a sophomore at a fancy private school where she's the poor scholarship student.  She and her best friend, Gretchen, are inseparable, and they do everything together with their two other girlfriends.  One night they try LSD, which seems to be a complete dud, but Gretchen gets lost in the woods and and after that night, she's different.

At first, Gretchen appears to be alternately moody and terrified.  She's acting so strangely that Abby is the only friend she has left, and then she has a complete change; suddenly Gretchen is queen of the school, and Abby is left in the dust.  Abby gradually comes to realize that Gretchen is no longer Gretchen; she's possessed by a demon.  With everyone convinced that Abby is the bad one, how can she save her friend?  But it's clear that nobody else is going to.

It's a lot of fun if you like bizarre scary things (but only in a story!) and it's very, very 80s.  Each chapter is the title of a song, every one of which I know far too well, because I too was a sophomore in 1988, as I suspect Hendrix was.  So I can imagine every single detail of the story all too easily!

I didn't realize until later that the author, Grady Hendrix, also wrote Horrorstör, which I enjoyed.  I'm not really a horror person, but these are my kind of thing.  And if you too were a sophomore in 1988, this novel is highly recommended.