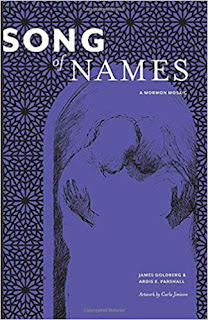 Song of Names: A Mormon Mosaic, by James Goldberg and Ardis E. Parshall

Here are another two LDS writers I've followed for a while, and they have produced an amazing, lyrical work.  Ardis Parshall is a historian and runs a fascinating blog of historical bits, Keepapitchinin.  James Goldberg is a writer and poet, and also has a blog, Mormon Midrashim, which he hardly ever posts to but it's worth it when he does.  James writes:

A few years ago, Ardis and I started writing a book together. An ambitious book, that would combine history and poetry to give people a viewed of Mormon history through individual lives as varied as stained glass. We wanted to take the extra research steps and writing steps to get at pieces of the past left out past the edges of our collective memory.   We did our best to find and sing forgotten names.

So this is a book of poems about the lives of real people.  Each one starts with a page of context -- a short description of the place and time.  Then there is the poem, and then a page of reflection.  Goldberg varies the poetic forms to suit the person and theme; I don't think any are the same.  One favorite of mine is a 'found poem,' which means that Ardis found letters from one James Guymon, and James arranged Guymon's sentences into a poetic format.  The words were found, not written.

Another favorite of mine was 'Slant Villanelle for William and Marie Graves' -- a black couple who lived in Oakland in the early 1900s -- partly because I saw when Ardis originally found bits of evidence about them, tracked down more information, and was able to make their story public knowledge.

My very favorite was 'The Ardent Churchman's Tale,' which I would like to quote for you in full, but I think it's probably too long.   It's the story of a Swedish man who emigrated in 1860, lived a hard-working life for 30 years, and then "his psychic break came, leaving heavenly images to flood through the cracks."

It's a very niche book, and I suppose relatively few will read or hear of it, compared to many more popular books, but the nooks and crannies are where we often find the greatest treasures.  This is a book to treasure, and I'm recommending it to many friends.