Beasts in My Belfry 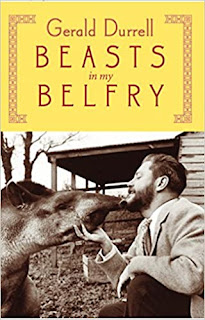 Beasts in My Belfry, by Gerald Durrell

I've loved Gerald Durrell's books for many years, and if you've never tried them, I hope you do.  Durrell was the founder of the world-famous conservation zoo on Jersey, and he wrote the books for publicity and fund-raising...plus he had a massive talent for writing about animals, founded in his love of all critters.  I saw Beasts in My Belfry at the public library and grabbed it with gleeful cries, because this is one I've never read.

From childhood, Jerry had only one ambition: to become an animal collector and perhaps even have his own zoo.  When he finished school, he wrote to every collector he could find, asking for a job as an assistant, but they all wanted someone experienced.  So Jerry applied to a zoo instead, hoping to gain experience with animals that someone would respect (because raising scorpions on your own doesn't count).   In 1945, he got a job as an assistant keeper at the Whipsnade Zoo, which is famous in the UK and which I'd never heard of, and spent a year or so learning about caring for wild animals.

The Whipsnade Zoo was one of the earliest zoos to try to make the animals feel at home.  Instead of being stuck in cages, visible to all but utterly miserable, animals were kept in open-air habitat enclosures, as we're used to today.  (Or at least, what people thought of as habitats.  They didn't always match and were often actually too large.)   Young Jerry spent a few months in each area, and kept obsessive notes on everything he saw.

So we get to know the various humans and critters through Jerry's curious and loving eyes.  Tigers, lions, yaks, wombats, polar bears, and Pere David deer, they all shine with personality.