If Truth Were A Child 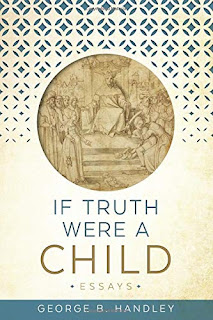 If Truth Were A Child: Essays by George Handley

I had been wanting to read this book of essays for some time, and when a friend had it on her summer pile I told her that I wanted to borrow it when she was done.  She loved it so much that she thought I needed my own copy, and gave it to me as a gift!  How lovely of her!   And, the odd title is explained by the use of the story of the two mothers who appeal to King Solomon.

George Handley is a professor at BYU who does a lot of writing about "the intersection between religion, literature, and the environment."  His degrees are in comparative literature (Spanish being one specialty) but he teaches in interdisciplinary humanities, which to me sounds a lot like 'comp lit with other stuff too.'    Anyway I followed his blog, when it existed, and I'm always interested to see what he's writing.

And these essays are fantastic; I enjoyed them so much.  There must be 20 little tabs marking things I liked.  Handley writes a lot about building community; the way humans organize together to build something, and it is always imperfect and always disappointing and often very painful, but also how we can make things better for each other.  It is so easy to point out the problems and leave, but might it be better to notice the good, and add to it, and try to heal each others' wounds, and address the problems?  He asks these questions -- only much more eloquently -- about literature, society, religion, pretty much everything.

I'm no good at communicating this stuff, which is why I read other people's writing.  So here are some bits:

In his marvelous essay, “The Way of Ignorance,” Wendell Berry insists that the burden of the gospels is to “accept our failure to understand, not as a misstatement or a textual flaw or as a problem to be solved, but as a question to live with and a burden to be borne.” We might know some things. We might even be in possession of some fundamental truths, but truth is no trophy you can hold up. Its value isn’t in possessing it. Its value is the love we muster to build relationships in its pursuit. This is why we need God, each other, even our enemies, to teach us truth. Paul made it clear: you can talk truth all the day long but if you don’t have charity, you have nothing. There is something truer than truth and it is love.

I prefer what scholars have called a hermeneutics of love, or of recovery, a way of interpreting that uses criticism to complete or fulfill or restore. It is the difference between looking for the faults of others in order to justify mistrust or using those faults as a way to measure how the spirit nevertheless moves through weak human vessels. To my mind, it is Christian to see what it is an author or artist aspired to, even if they didn’t quite achieve it. This is what I learned from Caribbean novelist and theorist, Edouard Glissant, who admired the white southern writer William Faulkner but also suspected that his representations of black characters and of women were perhaps a symptom of his own biases. Faulkner’s racism mattered, but Glissant decided it was better to imagine and work to complete the vision of a postslavery world of which Faulkner was first to catch an essential glimpse. In other words, the most appropriate response to limited human instruments through whom inspiration comes is not deconstructive cynicism or condemnation but the creativity to help build on the inspiration offered.

Christ suffered even this moment, you see. Because of his charity, no one’s feelings are unknown to him, no one’s perspective is incapable of finding a basis in an important truth. If you feel tempted to leave, please reconsider. We need you. We need to hear your pain. We need your questions. We need your gifts. We will all be better for working this through together. It would be, I think, a colossal mistake not to mention a contradiction for any of us, no matter our feelings on this issue, to refuse charity for others just because we perceive them being uncharitable. So look around you. There are others who are hurting. We are all members of the same body. As the humanities teach us, there is something fundamental healing about listening compassionately to the stories of others. Let’s listen together. In this regard, the way that the church makes us responsible and answerable to people different than we are is an opportunity to offer our charity widely. I have heard some people say that this a “sifting” moment in the church. Let’s be clear: you and I have no right to be sifters. We are commanded to be gatherers, one by one.

I still don’t understand all things, but I still know God loves us and that we should love one another. As I have prayed over my family’s situation, the Lord has never revealed why things have happened the way they have in my family. Instead he has repeatedly told me, almost to the point of redundancy, to love, love, and love some more. He has told me to relieve the suffering of others. That’s it. To have charity. When I have instead focused on wanting answers or on trying to explain or justify things, I find it can make me a bit crazy and sometimes I get filled with anger. Then there is the temptation of finding someone to blame and feeding an anger addiction. The internet is good for that....

If you are an engaged citizen, it is because you know those failings [of government] intimately, not because you are blind to them.  You are engaged precisely because you see them and because you have hope in overcoming them....[likewise, people in the church] aren't naive about the failings of the church.  How could they be if they have spent any time working hard to provide a satisfactory and spiritually healthy environment for members?  Indeed, the fact of their involvement makes them part of those failings.  That's the inherent risk you take if you want to be part of the solution.  No one gets off, you see, but least of all those who disengage entirely and imaging themselves innocent in their like-minded bubbles of cynicism.

No matter how homogeneous a [congregation] might at first appear, if it is filled with individuals, it is filled with diversity, wonder, and beautiful strangeness.  The only reason it doesn't seem that way, it seems to me, is because we haven't done the work nor exercised the imagination enough to begin to perceive the outlines of the many and diverse stories around us...And we cannot truly discover others without striving to serve them, and to truly discover another is to rediscover ourselves, so it is safe to say that the burden is on us to be curious enough to allow church to provide endless opportunity for renewal.

I suspect that it matters far more how much love we retain in our hearts for God and for our fellow men and women than what we think or how we reason our way through social and political issues. Ideas matter, but love matters more and love is an action that we render out of trust in what is good about others and about life and about God himself.