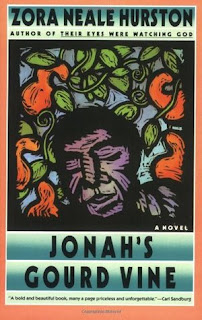 Erica at The Broken Spine has started a two-year project of reading the works of Zora Neale Hurston, which I think is an excellent plan.  Although I'm not planning to participate every month (who knows, I might!), I am planning to join in here and there.  The first book on the list is Hurston's first novel, Jonah's Gourd Vine, which was published in 1934, and I'm here to tell you that it's a great novel.

As a young man, John Buddy leaves home at 16 to escape increasing abuse from his stepfather.  He is strong and handsome, and is a great success with the other workers.  Lucy is only a schoolgirl when they first meet, but after a few years, they marry.  Lucy is a careful planner, where John tends to take things as they come.

Eventually they move down to Florida, to an all-black town,* where John works as a carpenter and Lucy raises their many children.  John has a wandering eye, and Lucy has to put up with quite a lot, but they also love each other very much -- but as John finds enormous success as a preacher, he also can't keep his infidelities secret.  His girlfriend Hattie resorts to black magic to hold him, and it's left ambiguous whether it works or not.  Either way, after Lucy's death John is relieved to be free of her moralistic ways, and heads straight down a road of self-destruction.  By the time he gets free of Hattie, he's lost everything and has to start over in a new place.  He might find happiness and rest, or he might sabotage himself again...

John and Lucy are based on Hurston's own parents, though I don't know how closely, and I have to presume that their youngest child, Isis, is Hurston herself.  It's a wonderful novel, written with great attention to the intricacies of language and an anthropologist's eye for folk practice.  I loved it.

I'm not sure I understand the application of the title.  It's a reference to the prophet Jonah, who after he got out of the belly of the great fish, grumpily went to Nineveh to preach repentance.  He told everybody that they had to repent or the city would be destroyed, and then he went to a hill above the city to watch the destruction.  But everybody repented, so then he was grumpy about them not getting destroyed.  The Lord caused a gourd vine to grow overnight, which shaded Jonah, but then he sent a worm to eat the vine, so that it died the next day.  Jonah complained about that too, and was told that if he cared about his vine so much, wouldn't God care about the many people of Nineveh?**  OK.  So, in the novel, John himself is described (by Hattie) as a Jonah's gourd vine that needs cutting down.  And while I would understand if John was compared to Jonah, I don't quite get how he's the vine itself.  Anybody with some insight there is welcome to comment!

If you want to join Erica's project, she's hosting it on Storygraph, and the next couple of months feature short stories and essays.

* Readers of Their Eyes Were Watching God will recognize the place!

** It should be noted that the book of Jonah is also a tall tale; everything is exaggerated to the point of absurdity.  It's not supposed to be a straight factual historical account.