This was a great re-read.  It's been so long since I read the early Watch novels, and I think I should revisit them.  I ran into many moments that I remembered well, but that I did not remember as being in this particular book -- the introduction of L-space, for example, always a favorite among librarians. 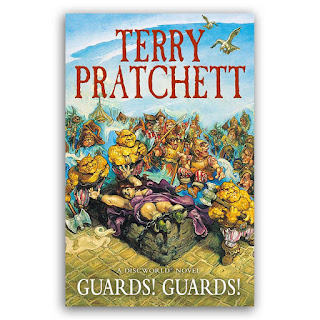 Sam Vimes is an officer of the Watch, but nobody takes the Watch seriously any more.  There are only a few of them left, and Vimes is best known for being drunk at all times.  Lord Vetinari has deliberately arranged the city to be full of rival Guilds that he can control, and for the Watch to be utterly irrelevant.  And then, young Carrot Ironfoundersson, a surprisingly tall dwarf with a very pure heart and a lot of energy, signs on.  And a dragon appears in Ankh-Morpork -- not your small swamp-type dragon, but the real, huge, people-eating kind.

There's plenty of Pterry's trademark observations about humans that are always painfully accurate, embedded in a story that is both extremely funny and also more than a little suffused with simmering rage.  And of course, a good deal of the joy is found in the details, such as the many secret clubs, each with its own complicated and arcane name and ritual.  My favorite is the Illuminated and Ancient Brethren of Ee.

A few quotations, because who doesn't love those?

They avoided one another's faces, for fear of what they might see mirrored there. Each man thought: one of the others is bound to say something soon, some protest, and then I'll murmur agreement, not actually say anything, I'm not stupid as that, but definitely murmur very firmly, so that the others will be in no doubt that I thoroughly disapprove, because at a time like this it behooves all decent men to nearly stand up and be almost heard...
No one said anything. The cowards, thought each man.

One of the things forgotten about the human spirit is that while it is, in the right conditions, noble and brave and wonderful, it is also, when you get right down to it, only human.

You have the effrontery to be squeamish, it thought at him. But we were dragons. We were supposed to be cruel, cunning, heartless and terrible. But this much I can tell you, you ape – the great face pressed even closer, so that Wonse was staring into the pitiless depths of his eyes – we never burned and tortured and ripped one another apart and called it morality.

“Monsters are getting more uppity, too (...) I heard where this guy, he killed this monster in this lake, no problem, stuck its arm up over the door (...) and you know what? Its mum come and complained. Its actual mum come right down to the hall next day and complained. Actually complained. That's the respect you get.”

If you let your mind dwell on rooms like this, you could end up being oddly sad and full of a strange diffuse compassion which would lead you to believe that it might be a good idea to wipe out the whole human race and start again with amoebas.

Knowledge equals power...
The string was important. After a while the Librarian stopped. He concentrated all his powers of librarianship.
Power equals energy...
People were stupid, sometimes. They thought the Library was a dangerous place because of all the magical books, which was true enough, but what made it really one of the most dangerous places there could ever be was the simple fact that it was a library.
Energy equals matter...
He swung into an avenue of shelving that was apparently a few feet long and walked along it briskly for half an hour.
Matter equals mass.
And mass distorts space. It distorts it into polyfractal L-space.
So, while the Dewey system has its fine points, when you're setting out to look something up in the multidimensional folds of L-space what you really need is a ball of string.

I'm so grateful to Kristen for keeping March Magics going!  It's always lovely to have a reason to grab a DWJ and a Pterry and travel far away.