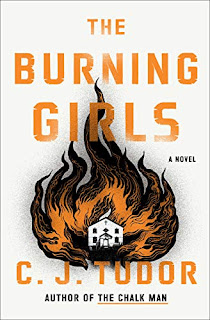 I'd seen good reviews of this gothic thriller, so when I saw it at the public library I took it home.  Then I had to read it since library books come with a deadline!

Reverend Jack Brooks, single mom, is forcibly transferred to the tiny Sussex village of Chapel Croft after a devastating tragedy in her previous inner-city parish.  Her daughter Flo, age 15, is naturally none too happy about this.  And Chapel Croft has a history -- several Protestants were burned as martyrs under Queen Mary I, and thirty years ago, two girls disappeared and were never seen again.

Everyone in the village talks a lot about fresh starts and leaving the past behind, which is remarkably unhelpful as Jack promptly starts getting warnings and strange packages that nobody wants to talk about.  Flo meets both the local outcast nerd boy and the local bullies, and Jack is nervously protective about the whole thing.

As they try to settle in, it becomes clear that in Chapel Croft, the past is not going away.  Is the churchyard really haunted?  What happened to Joy and Merry 30 years ago?  Everyone is holding on to some secrets, even Jack herself.

There is a lot going on here, and quite a few flashbacks or interludes that require you to slowly piece together who is narrating and what's going on.  Tudor doesn't make it easy, but the clues are there, so a reasonably astute reader will not be blindsided by the twists.  It's well-written and thrilling, though just on the edge of what I can take in the way of violence and so on.  I enjoyed it quite a bit and may decide to try another Tudor sometime.  Not something to read as a pick-me-up when you're down, but if you're in the mood for a spooky and somewhat gruesome thriller, this is a good one.

Although -- it's a fun read, but the characters in the story stretch the reader's suspension of disbelief extremely thin.  In this minuscule village, there are a remarkable number of horrifying people, and not one healthy family relationship to be seen.  After a while you start to kind of go "Really?"