Jews Don't Count (what a title!) 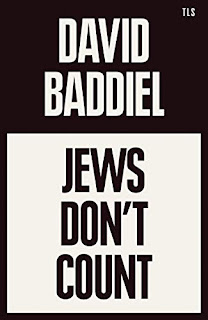 I'd never heard of David Baddiel, but I came upon a strong recommendation for this book, and oh it was a good idea.  It's a short book, and it's kind of an angry polemic rather than a carefully constructed argument, and it's riveting reading.

So, for my fellow Americans, who the heck is David Baddiel?  He's a British comedian/TV guy/writer who says he's one of the relatively few people in the UK who are famous as Jews.  And this is a very British book!  He talks a lot about famous Brits and events -- about half of the things mentioned were things I'd never heard of.  (Even I know about Jeremy Corbyn and the mural, though.  I'm still not too sure who Piers Morgan is but this week I learned that he is a TV person, not a politician.)  American issues sometimes get in, but this is mostly a very UK book, which means I learned a lot.

The premise here is one that I think is completely true.  Baddiel argues that, during the last 20 years of increasing awareness about racism and identity politics, the people who consider themselves to be warriors for righteousness and anti-racism have often not included Jews in the list of minority people who shouldn't be subject to discrimination.  They "don't count as a real minority."  Anti-Semitism is often overlooked or considered as less terrible than other kinds of racism -- there's a hierarchy of racism in our heads, and it isn't really a conscious one, but maybe we should take it out and look at it, because the ramifications are extensive.

Baddiel eloquently, and angrily, dissects those ramifications, and it's fascinating.  I've tried to study and notice anti-Semitism, because it's still alive and well; conspiracy thinking in particular, sooner or later, gets around to blaming the Jews.  What reading this showed me is that anti-Semitism is the oldest and probably the most insidious prejudice in Western civilization; it's been there for so long that it can be very hard to notice, and it gets entwined with all sorts of things so that it can be difficult to tease out.  (I sometimes wonder how many people repeat the words "international bankers" without even realizing what it really means.)  Even the defenses against the mention of anti-Semitism take part in the stereotypes.

I was quite shocked at some of the incidents Baddiel mentions -- the number of prominent people who feel comfortable saying "the Y-word" in public, and so on.  This is not part of my own experience, but then I grew up in California, and mostly in areas that didn't have a large Jewish population.  In college I dated a Jewish guy and got to go to seders and all sorts of things, which was lovely for me.  He also told me about his siblings' experiences having pennies thrown at them on the playground.  So.

I got a lot out of this book, and I highly recommend it.