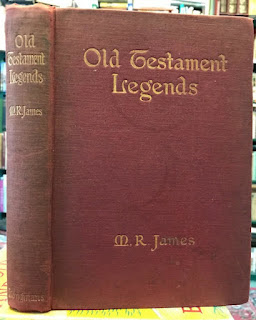 Old Testament Legends: Being Stories Out of Some of the Less-Known Apocryphal Books of the Old
Testament, by M. R. James

Remember a little while ago I read the Apocalypse of Abraham?  It's this very fun legendary story about Abraham figuring out that idols are just wood or stone.  Well, M. R. James (of spooky ghost story fame) thought it was a neat story too, so he put it into a book for children, along with other spurious legends about Old Testament characters.

...Perhaps I have now said enough to show of what sort the tales are that are told in this book -- some of them told for the first time in English.  They are not true, but the are very old; some of them, I think, are beautiful, and all of them seem to me interesting.

The stories include the deaths of Adam and Eve, how Asenath became the wife of Joseph of Egypt, an elaboration of the story of Job, how Solomon controlled demons, and others.  There's one about a man who went to gather figs and then slept for 66 years!  They're certainly colorful and exciting, especially the bits describing demons, and James has written them well.  I had fun with them, and I'd love to get a real original copy, instead of the digital copy I read.

M. R. James is the only person I can think of in the ENTIRE HISTORY OF THE WORLD who would find it a good idea to write up legends about Old Testament characters FOR CHILDREN, and then write up a sort of scholarly introduction to them explaining what the stories were.  I mean, I think it's great, but it is also very very weird.