The Apocalypse of Abraham and Ascension of Isaiah 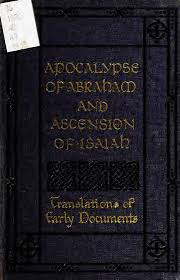 The Apocalypse of Abraham and Ascension of Isaiah

Some time ago, I happened to be reading about ancient scripture and the author mentioned "The Apocalypse of Abraham," which sounded intriguing.  With the magic of the internet, which has made so many old and difficult-to-obtain texts available to anybody willing to look for them, I found this Victorian translation of the Apocalypse and, as a bonus, "The Ascension of Isaiah."  Both of these are ancient texts that originally existed in Hebrew, but the only versions that survived into the present day were in Old Slavonic -- perhaps translated directly from the Hebrew, or perhaps mediated through Greek texts.

"The Apocalypse of Abraham" is an apocryphal text that tells the wonderful story of young Abraham (in the first person), his realization that his father's idolatry is wrong, and a vision/conversation with God.  It comes in three parts:

"The Ascension of Isaiah" is not as old and is a bit of a muddle, being probably formed of three texts and cast into a Christian perspective.  It features the prophet Isaiah telling King Hezekiah that his son, Manasseh, will not be a righteous king.  Manasseh then pursues Isaiah, who is martyred by being sawn in half with a wooden saw.  We then move back to an earlier time, when Isaiah has an extensive vision of the seven heavens and of the coming Christ.

These were neat texts to experience, though there is no doubt that I have only the slightest understanding of any of it.  Maybe someday I'll read them again!

I had downloaded the text in a generated .epub format so as to read it in my favorite Moon Reader at night (it can do pdfs too, but I like to have the text in amber on a black background for night reading).  This was kind of a mistake -- the footnotes and explanations abound, and everything looks the same after being put through an OCR, so I wound up picking my way through and finding the lost thread of the narrative amongst the many notes.  Maybe try it in a pdf if you want to read it.