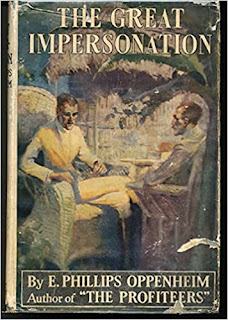 I have no idea how this wound up in my e-reader, but what a fun adventure tale this was!  It reminded me forcibly of The Riddle of the Sands (1903), in the way that you can see WWI coming over the horizon and what everybody is concerned about, but since it was published in 1920, after the war, it's really quite different.

1913, somewhere in German East Africa: Everard Dominey, a drunken, broken-down wreck of a disgraced English earl, meets up with an old schoolmate: Baron Leopold von Ragastein, a German who had an English education.  The two have always looked very alike, and they reminisce over drinks and tell their stories.

Months later, Everard Dominey comes home, telling everyone he's turned over a new leaf.  He makes up with his wife, who has teetered on the edge of sanity for years, ever since Dominey fought with her stalker/suitor and came home covered in blood.  He's nice to his relatives, which he never was before.  He actually has money and pays his debts for the first time in his life!   He joins the cream of society...and he intrigues with German agents, functioning as a sleeper agent with impeccable English credentials.  And von Ragastein's old girlfriend, a volatile Hungarian princess, keeps showing up and threatening to reveal his true identity. Will this daring impersonation pay off, or end in disaster?

It's a preposterous plot, improbable in the extreme, but lots of fun.  There's a haunted forest and a vengeful old lady!  Secret passages!  Spies, both honorable and not!  The Countess' mental illness makes no sense whatsoever -- it might as well be brain fever -- but what are you going to do.