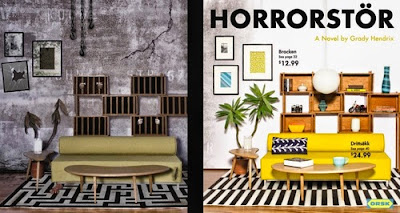 You've probably seen this cute horror novel around; it's made to look like an Ikea catalog.  It's set in a fictional Ikea knockoff, Orsk, so as not to offend the actual Ikea, but it's exactly the same and pretty funny.  The items all have pseudo-Scandinavian names, but goofier.

Amy, a disaffected Orsk employee behind on her rent, is recruited to stay the night with a couple of other staff; every morning, they've been finding weird smelly stains on the Brooka sofas and busted Liripip wardrobes, so the manager wants to find out what's going on.  At first, nothing much, though they find another two employees spending the night in hopes of finding a ghost and making a smash hit ghost hunting show.  But then things start going a bit wrong.

It's a traditional haunted mansion story, except set in an Ikea, which works really well.  Lots of space to run around and get lost in.  Five bucks says someone wants to make a movie!  (I just googled; it's being developed for TV.)  The story wound up being both more in-depth and scarier than I expected, so it was pretty good.

I mean, I figured Amy the Disaffected Retail Clerk would stay that way, and her opinion of her geeky, over-enthused manager Basil would be the author's opinion of Basil, but no.  (I love Basil.  He is my favorite.)  Ruth Anne, the Nice Older Lady reveals hidden depths too.  So it was more worthwhile fun fluff reading than I expected.

The Ikea knockoff part is very funny and I had a good time with that.  The graphic design of the novel is a large part of the reading experience.  Each chapter starts with a piece of furniture and its catalog description, but the item names get progressively sillier, so the Kjërring bookcase leads to the Wanweird kitchen and the Frånjk table, which isn't even a thing that can be pronounced.  Then the furniture starts getting creepy and torturous. 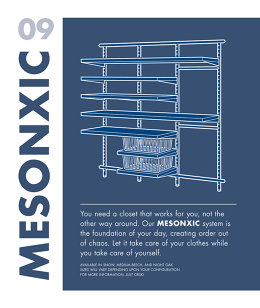 I always get some fun out of Ikea names anyway.  They're often real Scandinavian words slightly wonkified, or else they sound like real words.  These take it a step or two further, starting with mock Swedish and leading straight into bizarre gibberish.

It is an actual horror story too, but probably kind of light on the modern horror scale.  I'm not much on horror, but it doesn't get quite horrory enough to make me put it down, which I would have done if it got too icky.
SF/fantasy