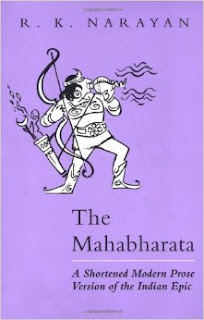 The Mahabharata, by R. K. Narayan

No, I didn't read all 18 volumes of thousands of poetic verses, but I did read this short prose retelling of the Mahabharata.  It's really short--less than 200 pages--so I guess it's really more of a summary than anything else!  Call it the Cliffs Notes version.  I enjoyed it though, and it's a fine introduction to the world's longest epic.  If you just want to know the basics, start here.

I did have a little bit of an advantage over someone who has never read any of the stories.  I had the comic-book version as a kid, and I must have read it many times, because I already knew many characters' names and who they were.  If you're coming to it completely fresh, you'll find the character list in front to be a big help, and it wouldn't be a bad idea to look up pictures of the characters as well; many of them are easily recognizable.

India's major epic is the story of the rivalry between two sets of cousins: the righteous Pandava brothers (five in number), and the greedy Kauravas (there are a hundred of them).  Dhritarashtra, the blind king, is a nice man who just cannot stay the course.  He loves his nephew Pandavas, and he knows his Kaurava sons are doing wrong, but he waffles.  He can't resist giving in to the demands of his son Duryodhana.  After years of scheming and the Pandavas spending a lot of time in exile, the result is a massive war for dominance. 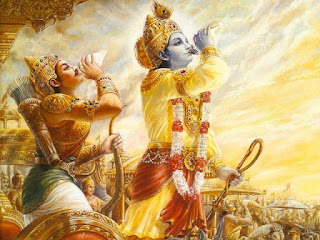 As the war is about to begin, the Pandava warriors are still reluctant.  They don't want to kill their own relatives, and Arjuna in particular loses courage.  Krishna then delivers a speech about detachment from earthly things and commitment to duty, culminating in a vision of his true form.  This section is called the Bhagavad Gita and is often published on its own as a life philosophy.

Everybody interested in literature ought to know the basics of the Mahabharata, and this is a pretty good introductory version.  Sometime I also want to read Palace of Illusions by one of my favorite authors, Chitra Banerjee Divakaruni, a retelling of the story from Draupadi's perspective.  I actually started it years ago, but didn't finish because I was so sure that terrible things were going to happen!  So I need to fix that.
folklore Indian literature