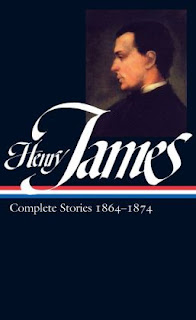 After my ignominious defeat with The Wings of the Dove, I thought I'd try a few Jamesian short stories.  I wanted to get back on the horse (so to speak), and anyway I didn't have any other ideas about who to read in July for this particular challenge.  So, I checked out volume I of the Library of America's 5-volume collection of James' short stories, which has his first 24.  I read three, and here they are:

A Most Extraordinary Case -- Young Colonel Mason, veteran of the Civil War, is ill and alone when his aunt comes to his rescue and takes him out to her country home to nurse him back to health.  He makes friends with his doctor and with his lovely and intelligent cousin Caroline, but somehow he just doesn't recover completely...

The Romance of Certain Old Clothes -- A historical sketch set during the colonial era.  Two sisters compete for the affections of an excitingly classy English visitor, and their mutual jealousy might last even beyond death.

Osborne's Revenge -- Osborne's best friend went on a trip and became engaged to a nice young lady who then spurned him, leading to his suicide.  Osborne determines that she should realize what she's done and be sorry, so he arranges to be in the same area.

Except for a touch of ghost story in The Romance of Certain Old Clothes, these early short pieces are distinctively realist in the James manner, though they aren't as meticulously, tiresomely detailed as The Wings of the Dove.  I really liked them very much and would be quite willing to read more, so I'm pleased that I gave the short stories a try.
American literature Literary Movements Challenge