Ecclesiastical History of the English People 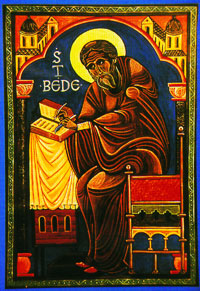 Ecclesiastical History of the English People, by the Venerable Bede

Woohoo, my Anglo-Saxon mood wound up with the entire Ecclesiastical History!  It was neat stuff.

Bede was a monk at the monastery of Jarrow in the kingdom of Northumbria.  He entered the monastery as a child for his education and stayed, becoming a respected writer and historian.  Jarrow had contacts with the prominent people of the day and Bede sent an early copy of his work to the king.

The History is divided into five books.  Book I gives a historical background of Britain and information about the Roman era.  It kind of skims over early Christian history in England which is treated in much more detail in the other books.  II lauds Pope Gregory and shows a lot of missionary work in England as kings and their peoples are converted.   III is a lot of fun.  Here we learn about the lives of Bishop Aidan and King Oswald, and all the miracles attributed to them.  IV also contains lots of miracles and holy lives, as well as local Church history and the centerpiece of the book, the Synod of Whitby.  And Caedmon!  In Book V more unity is achieved within the Church, and Bede describes some Biblical history to close things off.

The conflict between the Irish/British Church and the Roman Church over the proper date of Easter is a major theme here.  Everyone seems to have considered it to be of the first importance, and well worth arguing over.  At one point, the British bishops are to meet with an official from Rome, and they wonder how to tell if they should obey him or not.  They decide that if he is arrogant instead of humble and friendly (as a servant of God should be), then that will show that they should not obey him.  How to tell if he is arrogant?  Well, if he stands up to greet them, that will show that he sees them as equals, but if he stays seated, that will show that he is too proud.  The fact that he remains seated means that the argument over Easter lasts a lot longer.

Bede uses his book to demonstrate the rewards of holiness and the dangers of unrighteous behavior.  He wants to show the reader the right way to live, and he does it with myriad examples and anecdotes.  This is one of the primary purposes of historical writing:


For if history relates good things of good men, the attentive hearer is excited to imitate that which is good; or if it mentions evil things of wicked persons, nevertheless the religious and pious hearer or reader, shunning that which is hurtful and perverse, is the more earnestly excited to perform those things which he knows to be good, and worthy of God.

Reading Bede took some concentration--not always easy for me to come up with--but it was a very rewarding book to read.  I'm glad I put it on my CC list.


Jarrow is in the tiny county of Tyne and Wear.