Twilight of Democracy: The Seductive Lure of Authoritarianism, by Anne Applebaum 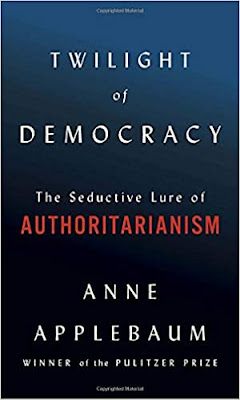 I admire Anne Applebaum a lot!  So I actually bought this.  Be impressed.  It's a short, and very personal, book that meditates on recent history and the dangers of authoritarianism.  Why is it attractive to so many?  How long can you hold on to a relationship when the other person espouses beliefs you can't agree with?

Applebaum starts with an engaging story -- a New Year's Eve party, 1999, in Poland -- a gathering of writers, thinkers, and dissidents.  Communism is defeated, and surely liberal democracy is the future.  But now, 20 years later, the group of former friends is split.  Many are involved in Poland's new authoritarian government.

A large part of the book is dedicated to how Poland got where it is now -- a history that includes conspiracy theory used as a tool by the power-hungry, and which uses the same old familiar weapons of nationalism, violence, fear, and anti-Semitism.  (Polish and Hungarian nationalists have also tried to use anti-Islamic/immigration sentiments to gain power, but since no Muslims want to emigrate to Poland or Hungary, they had to find other issues.)

Similar movements have started all over Europe, and Applebaum talks about several of them.  She also covers the UK's Brexit vote, and it's all fascinating.  (Apparently nobody was at all prepared for Brexit to actually pass.)

We then move to the power of online disinformation, and Americans' naiveté about the attractions of authoritarianism.  Applebaum posits that authoritarianism appeals to our desires for simple solutions to uncomfortable, complex times.  Swift societal change makes us nervous and willing to grab at 'strong leaders' promising those simple solutions.  But there is no easy map to a successful society, and when we try to impose one on reality, we end up with disaster.  We end with the very relevant story of the Dreyfus Affair in France, which has some pertinent lessons for us; I never even understood exactly what the deal was with Dreyfus, but we could all profit from studying it.

In a recent post, I quoted an author about loving people through differences.  Applebaum looks at the limits of that ability; having had many people she once considered close friends travel different paths, to the point of becoming viciously anti-Semitic or otherwise caught up in ugly political movements, she ponders the loss of these relationships.

It's a wonderful book with astute analysis of recent history, and it's not totally pessimistic about the future.  Rather, Applebaum reminds us that constitutional democracy is not a system that comes with guarantees, and it requires each of us to do our best to keep it.  Seriously, you should read this book.  It's officially on my list of books everyone should read.

There is no single explanation, and I will not offer either a grand theory or a universal solution.  But there is a theme: Given the right conditions, any society can turn against democracy. Indeed, if history is anything to go by, all societies eventually will.

Not long ago, at a fish restaurant in an ugly square on a beautiful night in Athens, I described my 1999 New Year’s Eve party to a Greek political scientist. Quietly, he laughed at me. Or rather, he laughed with me; he didn’t mean to be rude. But this thing I was calling polarization was nothing new. “The post-1989 liberal moment—this was the exception,” Stathis Kalyvas told me. Polarization is normal. More to the point, I would add, skepticism about liberal democracy is also normal. And the appeal of authoritarianism is eternal.

Until very recently, the leaders of "far-right" nationalist or nativist parties in Europe rarely worked together.  Unlike center-right Christian Democrats, whose collaboration created the EU, nationalist parties are rooted in their own particular histories.  The modern French radical right has distant origins in the Vichy era.  The Italian nationalist right has long featured the intellectual descendants of dictator Benito Mussolini, not to mention his actual granddaughter.  Law and Justice (Poland) has its links to the Smolensk place crash and its own historical obsessions...

...optimism about the possibilities of government has been coded into our political culture since 1776. In that year it was not at all “self-evident,” in most of the world, that all men were created equal. Nor was it obvious, in 1789, that “we the people” were capable of forming a “more perfect union,” or even that “we the people” were capable of governing ourselves at all. Nevertheless, a small group of men clustered on the eastern seaboard of what was then a wild continent wrote those words and then built a set of institutions designed to make them come true. They were sanguine about human nature, which they did not believe could be perfected. Instead, they sought to create a system, stuffed with checks and balances, that would encourage people to behave better. Neither then nor later did their lofty words always reflect reality. Neither then nor later did their institutions always function as intended. But over time, the words proved powerful enough and the institutions flexible enough to encompass ever larger circles of fully vested citizens, eventually including not just men but women, people without property or wealth, former slaves, and immigrants from every culture.  When the institutions failed, as they sometimes did, the words were recited and repeated in order to persuade people to try again. Abraham Lincoln spoke of America as the “last, best hope of earth.” Martin Luther King Jr. dreamed that “one day this nation will rise up and live out the true meaning of its creed: ‘We hold these truths to be self-evident; that all men are created equal.’ ”

This way of speaking—“Putin is a killer, but so are we all”—mirrors Putin’s own propaganda, which often states, in so many words, “Okay, Russia is corrupt, but so is everyone else.” It is an argument for moral equivalence, an argument that undermines faith, hope, and the belief that we can live up to the language of our Constitution....This form of moral equivalence—the belief that democracy is no different, at base, from autocracy—is a familiar argument, and one long used by authoritarians.

[Anti-Dreyfusards] clung to their beliefs in Dreyfus' guilt -- and their absolute loyalty to the nation -- even when the fakery [of Dreyfus' framing] was revealed.  To persuade them to maintain this loyalty, a whole claque of 19th-century clercs had to drop their commitment to objective truth.  Dreyfus was not a spy.  To prove that he was, the anti-Dreyfusards had to disparage evidence, law, justice, and even rational thought....they eventually attacked science itself, because it was modern and universal, and because it came into conflict with the emotional cult of ancestry and place.

books everyone should read history politics