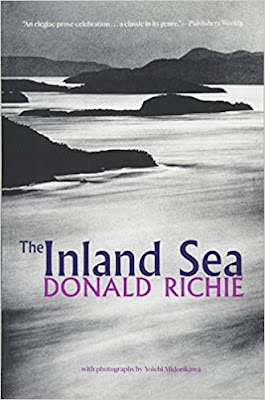 The Inland Sea, by Donald Richie

This account is touted as a classic of travel literature, so I was very excited to read it; I love travel literature!  In this case, I was somewhat disappointed.  The travel parts are wonderful, but Richie talks a lot about himself, and...I don't like him very much.  He also talks a lot about the Japanese character, and it feels strange.  So, while I liked parts of it, on the whole...meh.

Richie lived in Japan for all of his adult life, and this book was written in the late 60s from his journals of a trip taken in 1961 -- and somewhat streamlined.  The important thing about it is that he's describing an area of Japan that at the time was still very isolated from urban culture, and many of the people were still living a way of life that modernity had not yet taken over.  It's mostly tiny fishing villages and little puttering boats that go from island to island, and Richie is very aware that most likely, pretty soon it will all be covered in large cities and factories.  (And yes, when I looked up some of the places on a modern map, places that had been villages are now completely urban.)

I especially liked the stories of the very old people Richie met -- people who remembered the Meiji era (which ended in 1912).  A particularly amazing bit is the story of one old man who says...

...they used to have great sport out here with the octopus, which grows to great size in these shallow seas.  They would catch a large one and bring it into the boat.  Then they would put it on the back of one of the boys, like a knapsack, the large, snakelike tentacles wrapped around his chest, the monster first struggling, then holding like a python.  With it on his back, the boy would dive into the sea.  Though the octopus was free to escape, it never did.  It was too used to holding onto things; once onto something, it would never let go.  Since it was back in the sea, however, it swam in its own fashion, shooting water out behind while firmly attached to the boy's back, and he could half-guide it, much as one directs a stubborn donkey.  In this way to youngster could enjoy an exhilarating ride, held up by the half-submerged octopus, propelled at a great rate, diving, gradually turning around and being propelled back to the boat...

After that, of course, the octopus became dinner.

There's also quite a bit about Japanese night life, traditional and modern, and various other people he meets.  But those parts were mostly not as interesting or pleasant.

I suppose it's a bit of a must-read if you're very interested in Japan, but I would have liked it better if about half of the material had been left out.