Queen of the Sea

Queen of the Sea, by Dylan Meconis 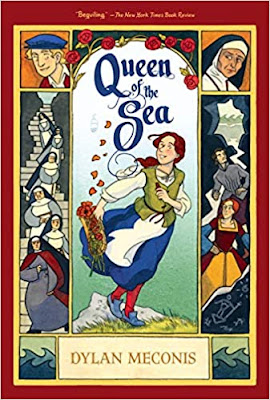 My mom handed me this long graphic novel and said I'd like it, and so I did!  I thought this was a really unusual, and lovely, story.  It's kind of if you had the Tudors in an alternate universe.

Margaret has always lived on the island with the nuns.  It's a very remote island, and the convent is there to pray for and take care of sailors.  Margaret arrived as an infant and doesn't know who her parents are, and she's the only child on the island, until a lady comes with her son, William.  And then Eleanor arrives -- a deposed queen whose half-sister Catherine has taken over the throne.  Margaret is interested in Eleanor, but Eleanor is angry and suspicious...

Pretty much, it's got an alternate version of Henry VIII with just two daughters, and when the younger sister becomes queen, the older one rallies her supporters and attacks.  Everything happens on the island (I think it's a version of St. Kilda), and through Margaret's eyes, and she doesn't understand very much.  So it's really interesting.

The whole thing is done as a sort of diary or notebook.  The style -- of a young girl explaining herself and her story -- sometimes reminded me very strongly of the Amelia's Notebook series of graphic novels by Marissa Moss, which was fun.  Margaret often stops to explain things, such as the various kinds of nuns, how to play chess, or what relics are.  She's a great character with imagination and humor; you want to be friends with her.  And, what is unusual in a historical fiction story, she's not an obvious 21st century girl plopped down in the 16th century, ready to fight the patriarchy and teach all those benighted nuns a lesson or three.

I enjoyed this graphic novel so much!  I read the whole thing at one go and laughed quite a bit, but it's also an exciting adventure story that's hard to put down, and very well researched; the details of everyday life are perfect.  Tudor fans will be especially happy with this one, but anybody could enjoy it. 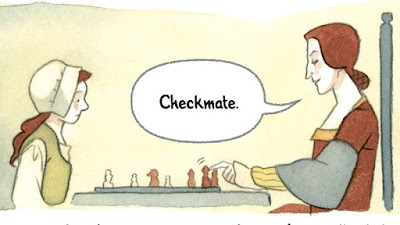