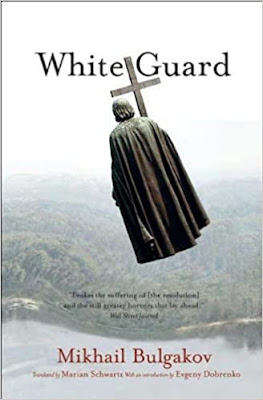 This is Mikhail Bulgakov's first novel, written in 1921 and published serially -- except that the magazine shut down and the last part of the novel was not published at the time.  Instead, it was turned into a play, The Days of the Turbins, and the play was such a smash hit that the novel was kind of ignored.  Bulgakov didn't finish it for several years.

It is 1918, and the Turbins of Kiev are a family of three siblings: Elena, whose husband has been working for the German hetman, Alexei, a doctor with the Russian (White) army, and Nikolka, just 17.  They belong to the Russian-based urban/military class.  Ukraine has been pulled nearly to pieces in the complicated war; at the start of the novel, the Germans had installed a hetman to run the country for them, but now they are pulling out.  Elena's husband heads out with them.  Now there are three sides to the war: the Russian military trying to restore the Empire, Petlyura, the leader of a Ukrainian nationalist party for an independent country, and the Red Army, intent on liberating Ukraine into the Soviet Union.   Petlyura is taking over Kiev and Russians of any kind, but especially military Russians, will be killed on sight.  So Alexei and all other officers have to rip the epaulets and insignia from their uniforms, since they'll be recognized instantly.

For the moment, Ukrainians are on the rise and Russians are not, but Kiev is heavily populated with Russians.  The countryside is all Ukrainians, and there is a sense of being besieged on all sides.  At any moment, there might be a knock on the door and their home may be searched by soldiers -- or just by street thugs.  Everything is chaos.

The Turbins are loyal to their lost cause, but it's truly a pointless one.  The military headquarters, like the entire Russian government, is staffed by incompetent men who have no regard for the people they order to absurd and meaningless deaths.  So people survive by romanticizing and daydreaming about their beautiful legends and their honor, because real life is impossible to understand or witness; it's too terrible.  As always, the Russian state cares nothing for freedom, or for the value of the individual -- the new won't do any better than the old.

It's a great novel.  It's also quite difficult to keep everything straight, what with the four different sides fighting over Ukraine -- I tried to read a bit about it but the whole thing was incredibly complex -- and the large cast of characters.  I'll probably need to read it again someday and try to understand it better, but I'm really happy I read it, and I plan to read more Bulgakov in future.

By the way, I love this book cover.  It made me happy even before I figured out what it is supposed to be.  But here's an explanation for you, too.  This is the statue of St. Vladimir that presides over the city of Kiev, on the river Dnieper.  It's a famous symbol of Kiev, and the statue is described at a couple of points in the novel.  I like the absurdity of the statue flying over the river, presumably to protect his city and people.