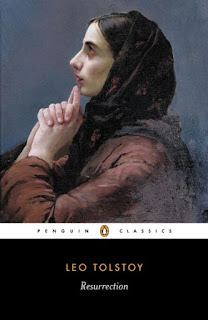 Wow, what a novel this is.  It was published in 1899, Tolstoy's last great work, and also his first novel in over 20 years.  He had come to believe that art had to have a purpose and that he should no longer write novels, but when the Dukhobor sect needed money to emigrate to Canada, he wrote this as a fundraiser, and to express the views he had come to hold.

Prince Nekhlyudov is your average dissipated rich nobleman; having gone to school and served in the military, and now living in society, he has been well trained in manners, dress, extravagance,  overindulgence in drink, and affairs with women.  He probably ought to settle down and is looking for a society wife.  Called to serve on a jury, he is astounded to recognize one of the defendants in a murder case; it's Katusha, the servant girl he once loved, and then seduced and abandoned.  Realizing that her entire sad life is his fault, he decides that he needs to atone -- and so he appeals her case (she is innocent and wrongly sentenced) and determines to either marry her or follow her to Siberia.

Katusha is less than thrilled with this idea.  She can hardly stand to think about Nekhlyudov at first; she had been truly in love with him and was stunned by his callous abandonment.  Since then she has done her best to shove her memories as far down as she can, and now she can see that as once he made use of her body, now he kind of wants to make use of her soul.  She doesn't want to marry him, but does ask that he intervene in another prisoner's case.

Nekhlyudov gets to know a lot of prisoners well, and is horrified by the conditions he sees, and the many innocent people sent to prison.  He starts interceding for them with the officials, and follows the prison convoy on its three-month trip to Siberia (most of the prisoners have to walk).

So the prince has a spiritual awakening, in which he realizes (just like Tolstoy!) how corrupt his entire society is, and how oppressed most of the Russian people are.  He learns, like Tolstoy, that private ownership of land is a ridiculous idea, that it is barbarous to force millions of serfs to labor all their lives in order to make a few people's lives extravagantly luxurious, and that the entire justice system exists to enact oppression.  And that the Orthodox Church is entirely corrupt.  (Tolstoy hated the Russian church establishment, and attacks it at length here, but also he didn't know as much about it as he thought he did, so he gets a bunch of things wrong.)  If only everybody would live simply and wholesomely, according to the Gospels, everything would be much better, and Nekhlyudov wants to make it happen.

What's interesting is the progress of Nekhlyudov's awakening, which takes the whole book (and then some).  At first, he's full of good intentions, and also very pleased with himself.  He thinks himself a very wonderful fellow, which he is not.  He goes through stages like this -- a realization, an idea of what he should do, pride in himself, and then a reality check.  He gets to know a huge variety of people and finds that they are all interesting, and the more he looks outside himself, the more tolerable he becomes.  But he never really gets to know Katusha all that well; she intelligently shields herself.   She doesn't trust in his reform, which she is quite correct to do.  It's impossible to tell where Nekhlyudov is going to jump next.

Tolstoy makes it clear that Nekhlyudov is not the hero he sometimes thinks himself to be.  And yet, the reader also gets the impression that Tolstoy is writing a character that even he doesn't fully understand; that because Nekhlyudov is really a version of Tolstoy himself, that he thinks better of his prince than he really ought to.  It's fascinating.

This really is a great Tolstoy novel; it ought to be just as famous as the other two, and it has, I think, more variety of life, even though the cast of characters is smaller; we stick with Nekhlyudov through the entire story and don't change perspectives as with War and Peace..  We truly meet all classes and types here.  Tolstoy's ideas about how the world should be arranged are, I think, better integrated into the story than is true with War and Peace or Anna Karenina; at least, there isn't 50+ pages of political philosophy at the end.  But we certainly get a good idea of what he wants...although quite a bit of it sounds on the impossible side.